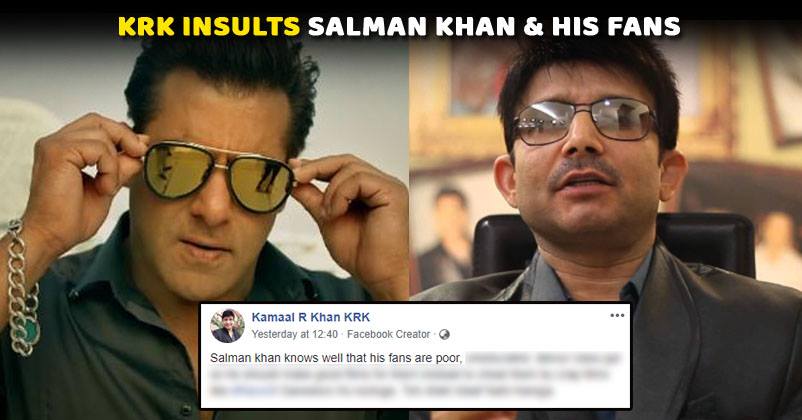 Salman Khan’s latest Eid offering hasn’t been accepted well by fans; everyone had huge expectations, but Race 3 shattered it all.

However, the film managed to become the highest opener of 2018, thanks to Salman’s huge fan following.

Salman Khan is being trolled on Twitter for his bad movie. Even KRK came up with a very controversial review about the same. Well, KRK’s reviews are known to annoy people. However, he speaks the truth many a times.

This time KRK is once again in news due to his Race 3 review. He has trolled Salman Khan and has asked him to stop cheating fans.

He wrote, “Salman khan knows well that his fans are poor, uneducated, labour class ppl so he should make good films for them instead to cheat them by crap films like #Race3! Gareebon Ko lootoge, Toh Allah Maaf Nahi Karega.”

As expected, Salman Khan fans gave it back to him. They trolled him left and right;

Well, this time KRK is right, but still Bhai’s fans are trolling him. What do you think?

Continue Reading
You may also like...
Related Topics:KRK, salman khan

Shirish Tweeted, “LG In Delhi Isn’t Working”. This Is What LG Electronics Replied
Fan Got Tattoo Of Mia’s Face & Chest On His Body. Got Slammed By Her