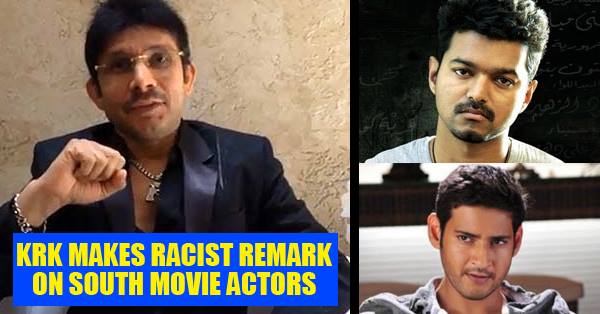 The controversy king Kamaal Rashid Khan who is popularly known as KRK has once again done something which made him an object of mockery and fun on social media. Yes, our favorite (satirically) KRK has posted a racist remark this time about South Indian actors, showing them in such poor light that may make any actor or fan of South Indian movies angry!

First of all, let’s take a look at the racist tweet by KRK which irked netizens who in turn slammed the self-proclaimed critic:

KRK invited criticism for himself by posting this racist and disgusting tweet and faced wrath of Twitterati!

Go and see your face in the mirror!

You are not even an actor:

@kamaalrkhan Good observation. You know what you missed? You are khaali peeli and vela! Not even an actor!

Thank God! KRK’s name is not in the list!

@kamaalrkhan Thank God.. For a moment I thought you're going to write KRK also….. Bach gaye

This user has taken KRK’s remark too seriously:

First look at yourself you Kale Peele Neele critic:

@kamaalrkhan u r also a kalla peela and neela critic

@kamaalrkhan Your concept of acting is fair skin n chocolate looks.Grow up if in the industry . See some good southern movies for s start.

“Aa Bail Mujhe Maar” seems to be a perfect saying for KRK, doesn’t it?

Do let us know your views about KRK’s tweet in the comments section below.

Do You Know Why Pen’s Cap Have Tiny Hole At The End? Here’s Why!
This Is How Much It Will Cost You For Travelling In The Bullet Train Between Mumbai And Ahmedabad!