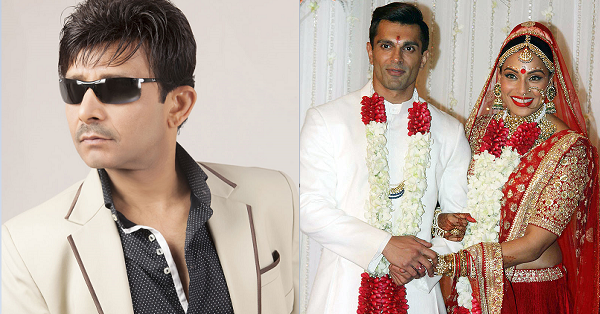 There is absolutely no denying the fact that KRK and controversy go hand in hand and that’s why he can also be popularly called controversy king who rules Twitter, even though with insensible tweets! Yes, he is a very famous personality on social media and people are always interested in reading whatever he posts, no matter whether they end up abusing him. We all are very well familiar with one habit of KRK which he just can’t seems to give up; trolling celebs and posting bad things about them! And once again he has posted something on Twitter about Bengali bombshell’s husband Karan Singh Grover. Just to inform, the “Alone” couple had been in a relationship for quite a good time and recently tied knot. Their marriage has indeed been a grand event on account of presence of most number of stars from TV industry and Bollywood which invited media highlights to a great extent. KRK is generally abused for nonsense stuffs he usually posts; however, this time, you’ll actually agree with him! First of all, let’s take a look at his tweet: It’s not a hidden fact that Karan is married twice before Bipasha; initially to Shraddha Nigam who is a Sikh by religion and then to Jennifer Winget who belongs to a different religion, i.e., Christian and lastly, he tied knot with Bipasha Basu who is a Hindu, yet again a different religion. Well, from this perspective, KRK is absolutely right this time and we can’t help but agree with him!

What’s more, Karan was trolled on social media for getting married the third time when he posted the news of his wedding with Bips on Twitter.

Do let us know your views about KRK’s tweet in the comments section below.