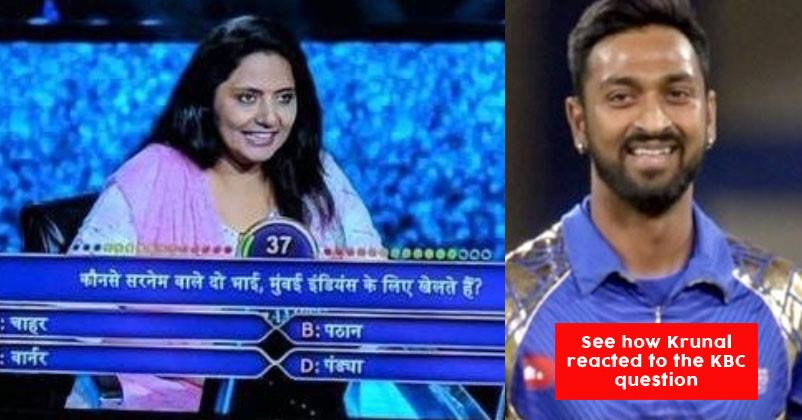 India’s most popular television quiz show Kaun Banega Crorepati is back with with its 11th season hosted by none other than the Big B of Bollywood Amitabh Bachchan. KBC has a huge fan following amongst every age Shahenshah’s anchoring adds a charm to the show.

As we know in KBC several questions based on General Knowledge is asked from different fields to the players starting from sports, politics, history etc. One such question from yesterday’s episode grabbed the attention of Indian cricketer Krunal Pandya.

Special shoutout to @hardikpandya93 ! Moments like these are best celebrated with family and Hardik deserves this trophy for the amount of hardwork, dedication, and strength. What a season bhai 🔥 You've conquered IPL, now go conquer the world my brother ❤😘

A female contestant was in the hot chair when Bachchan asked the question displayed on their computer screen. Which two brothers play for Mumbai Indians with the same surname? Amitabh Bachchan gave four options to the contestant Chahar, Pathan, Warner and Pandya. The answer was the star players of Baroda Krunal and Hardik Pandya.

The elder Pandya brother Krunal took to his twitter handle to answer the question. He shared an image from the show when the question was asked to the lady with the caption, Sir, ‘D’ ko lock kiya jaye please and tagged Senior Bachchan.

Currently, the Pandya brothers are gearing up to play for India in the upcoming T20 series against South Africa.

Netizens Go Gaga Over Virat Kohli’s Throwback Picture From An Old Match
Only Females Are Recommended By Sports Ministry For Padma Awards, Twitter Is Celebrating