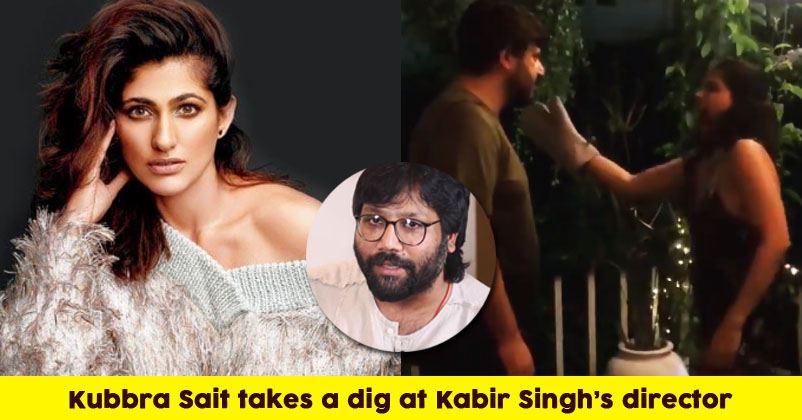 Kabir Singh has been the talk of this Bollywood season. The Arjun Reddy remake was termed ‘ filled with toxic masculinity’ and ‘misogynic’. While a lot of people enjoyed the movie, some people had sheer hatred towards the movie. The film still crossed the 200-crore group and ruled the box office for some time.

People had polar opinions about the movie, but things took a bad turn for the movie when director, Sandeep Vanga went on record and said,

“When you are deeply in love and deeply connected to a woman (and vice versa), if you don’t have the liberty of slapping each other, then I don’t see anything there.”

People were shocked by this comment and the director got heavily criticized for this comment. A lot of women were upset by this weird comment and took to various social media platforms to share their displease. Among them was Kubbra Sait. Kubbra Sait has been known in the industry for voicing her opinions and breaking the ‘norms’.

In a slow-mo video by Kubbra and Goldie Behl, they made fun of Sandeep Vanga in a sarcastic way! They made a video in which both are seen wearing oven mitts and slapping each other because you know this is how you show ‘love’.

This is what love will look like if men and WOMEN are taught that slapping is being emotional.
💎 Man @GOLDIEBEHL 🙏🏽 pic.twitter.com/VTC5SkrR8r

The video is hilarious! Kubbra was also seen practicing some ‘self-love’.

I’ll leave you with this thought.
Good night. pic.twitter.com/WOrWJy0ECn

Hate or love the movie, you can’t hate Kubbra for her witty attitude!