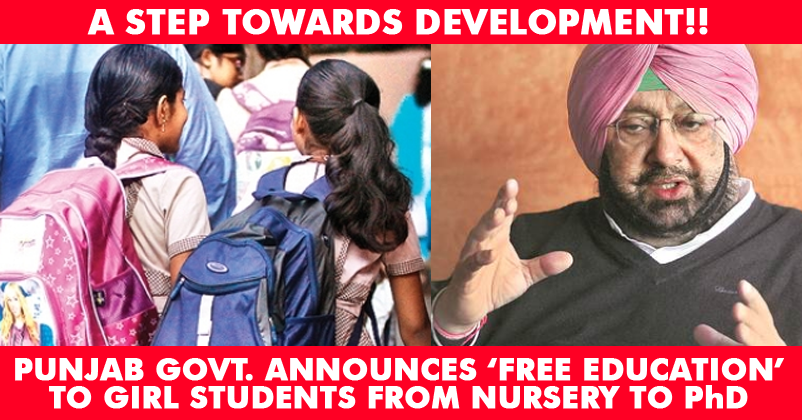 Captain Amarinder Singh, the Chief Minister of Punjab, has been taking some wonderful steps for the betterment of the state. First he said no to VIP culture by banning red beacon lights on vehicles in the state, then waived off loans for the farmers and now, has announced free education for girls.

Yeah , this is good news; girls will get free education right from KG to PhD in government institutions. This is an important step towards developing the society. This announcement was made by the CM on Monday in the Vidhan Sabha. Not only this, he also said that free textbooks will be offered to students in government schools. Talking further, Amarinder Singh said that they have plans of providing free Wi-Fi facility to 13,000 primary schools along with 48 government colleges.

These textbooks will be available online and parents and students can download them for free.
Stressing on education, the CM said that even though the resources are limited, utmost attention would be paid to education sector. Also, they aim to increase the education sector budget.

In this plan, 5 new colleges will be built this year itself. Captain Amarinder Singh said that this would bridge gap between rich people who get all facilities and poor people, who crave to get more and more resources.

Apart from this, reports say,

“The government also has plans to offer English as a medium of instruction in government schools. To do this, initially, two schools at all levels from every block will have English medium from July.” Punjab will reach new levels if education sector gets this boost. Moreover, free education for girls is what all states should follow. Must say, wonderful step taken by Captain Amarinder Singh.

15 Indians Arrested As They Celebrated Pakistan’s Win In Champions Trophy!
Punjab Govt Waived Off Farm Loans But Media Didn’t Highlight While UP Govt’s Act Got Limelight