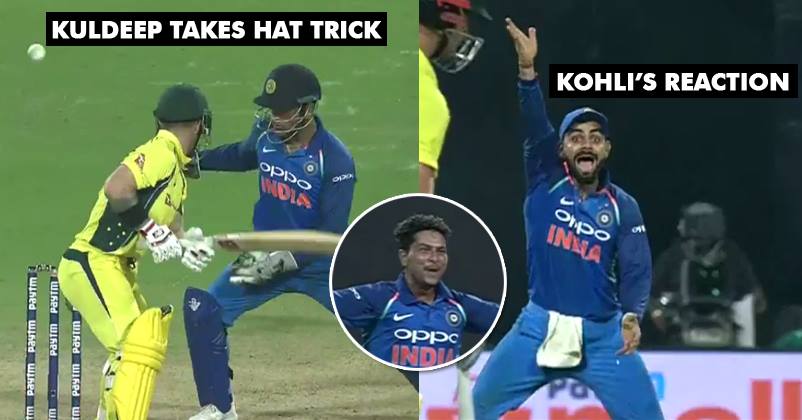 India has made us proud by clinching the 2-0 lead in the 2nd ODI against Australia today at Eden Gardens. They defeated Australia by 50 runs ; no doubt, the game was damn interesting, but it was Kuldeep Yadav who added to the fire.

Yes, the left arm spinner showed a brilliant performance and helped the team dismiss the Aussies at just 202.

Well, he took a hat-trick and stunned everyone. In the first 7 overs, he gave away many runs, but from his 8th over, tables were turned. Kuldeep Yadav dismissed Pat Cummins, Ashton Agar and Matthew Wade and this contributed a lot to India’s victory. At the end, his figures were 3-54. With this, he became the 3rd Indian to take a hat-trick in ODI, the first 2 being Kapil Dev and Chetan Sharma. This has happened after 26 long years. Check out the stats; 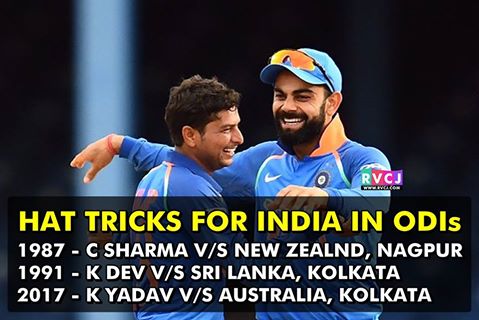 In case you have missed the match, here’s the hat-trick video; moreover, you can’t miss how happily Virat Kohli reacted.

In case you don’t have ample time to watch full video of 1 minute then here’s the gif:-

Kuldeep Yadav is an absolute beauty. Only the third Indian to clinch hat trick in ODIs.
India has got a Chinaman for WC19. #INDvAUS

Happy for the young man!

You won't see a better hat trick ball than that from Kuldeep Yadav! So happy for the young man.👏👏👏#HatTrick

कुल का दीपक चमक गया….well bowled, Kuldeep Yadav 😊🙌 three balls turned a forgettable outing into one to cherish for the rest of your life!

What a wonderful moment! Kudos to Kuldeep, you have made us overjoyed today.