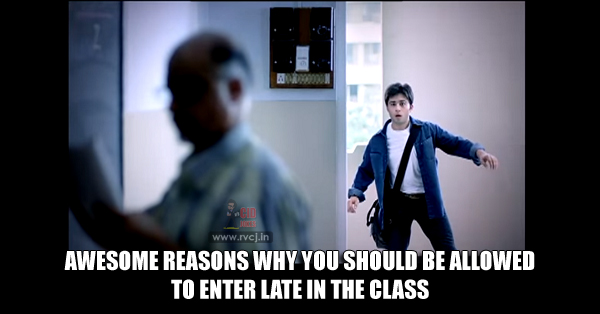 There are times in college career when one gets late for classes. This often happens in morning classes as one is lazy or is struck in traffic. There are many reasons why one gets late for the class, but there are reasons why one should be allowed to enter late in class too. I’m sure you won’t ever have thought of some of these. It’s better to show up late than not to show up at all. Here are some awesome reasons which will surely make you feel confident about it.

Have a look at some awesome reasons why you should be allowed to enter Late In the Class.

Late In The Class?

You’ve surely paid a huge amount of money for studying in the Institute. They can’t simply tell you to not to enter in just because you are late. If this happens your money goes in vain, simply. You have rights as you have paid for it they can’t take your rights away. Sometimes, there are actually some problems like traffic, transport breakdown, health issues etc. which are responsible for a student to be late for a class so, the students are barred from entering in the class which should be avoided.

4. One is Aware Of The Topic Being Taught

One may have studied a topic earlier and doesn’t need to practice on that. For saving his time and energy, one wants to miss the starting part of the class so that he can get attendance & homework at the end of the class.

As an example, In a class of 60 students it’s most probable that half of the students are on time & the other half is late no matter what & why. It’s least probable that everyone is on time reason may be anything, hence entrance shouldn’t be barred. If you show up late for the class you’re not simply disrespecting the teacher. At least you showed up that’s what matters. Hence, You should be allowed to enter late in the class.

Do not forget to share & let us know your views please write in the comments section below.

Can You Imagine A Place Without Roads? Well, There Exists One! Read On
If You Are A Barbie Fan, You Must Buy ‘Hijarbie’! Confused? Well Read To Know What It Is