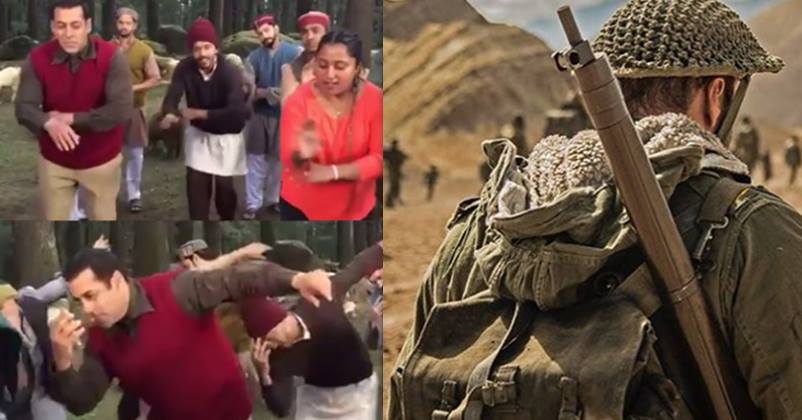 Salman Khan’s latest flick ‘Sultan’ had taken the box office by storm and had broken many records. Obviously, if it is a Salman starrer, fans are bound to flock the theaters, and numbers have to be ‘Massive’.

After the ‘Sultan’ craze, Bhai’s fans are eagerly waiting for his upcoming release ‘Tubelight’. Yes, the movie has already created a lot of buzz and is slated to release next year. This Kabir Khan flick revolves around a historical war and to add to the spice, makers have roped in Zhu Zhu, the 32 year old Chinese singer and actress, opposite Salman. If you are a Salman Khan fan, you might obviously be very curious to see how their chemistry is, isn’t it? Moreover, when we see those leaked pictures on social media, our excitement automatically doubles up.

Recently a back facing picture of the actor in soldier’s attire, was released by the makers; everyone was damn sure that it is Salman who is essaying the character of a soldier, but later the rumors were rubbished, as makers revealed that it is Sohail Khan and not Salman. Now, we have something to show you! We just came across a video of Salman Khan rehearsing for a Tubelight song on his fan account. You are going to fall in love with his cute dancing skills; want to watch it? Here you go….

This song is choreographed by Shabina Khan , the one who choreographed songs for Prem Ratan Dhan Payo. The way Salman is dancing is awesome and we are eager to watch him on big screen now. So guys what is your take on this? Do share your views in our comments section below.

These Singers Have An Amazing Voice & Have Given BIG HITS But Some Might Not Even Know Them!
Finally Fawad Khan Speaks & Confirmed He Never Said “Bollywood Kisike Baap Ka Nahi Hain”