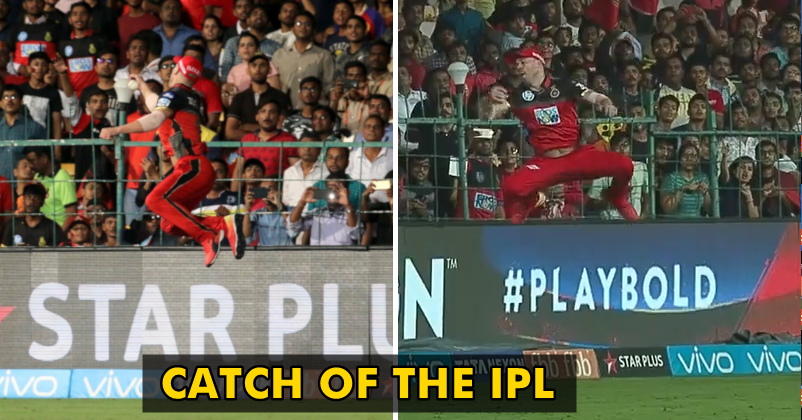 Today’s match between RCB and Sunrisers Hyderabad looks very interesting. It’s very important for RCB to win this match to keep themselves closer to the play off qualification.

RCB batted first and scored a whopping 218 runs at the end of 20 overs. Moeen Ali and AB de Villiers contributed immensely to this huge total by smashing half centuries. Ali hit 65 in 34 deliveries while ABD scored 69 in just 39 balls.

Not only did ABD show excellence in batting, but impressed us with his superman catch too. In the 8th over of SRH’s batting innings, Alex Hales tried hitting a huge six to Moeen Ali’s delivery. However, ABD showed alertness and flexibility by jumping high & taking this superb catch.

No one expected him to take this catch; in fact, everyone thought that the ball was going for a 6. It was an important wicket for RCB as Hales had already scored 37 runs off 24 balls. But kudos to AB de Villiers for taking this “Catch of the IPL”

Twitter is filled with reactions after seeing this superb catch;

What a great catch by ABD.. caught that catch like Amit Shah catches the MLAs. #abdevillers #RCBvSRH

ABD you beauty! You have made us happy with this stunning catch. Keep rocking…

Continue Reading
You may also like...
Related Topics:ABD, catch, RCB

KL Rahul And Hardik Pandya Exchange Jerseys After KXIP And MI Match. This Is The Reason
ICC May Scrap Coin Toss Tradition & Replace It With This New Rule. Twitter Is Not Happy