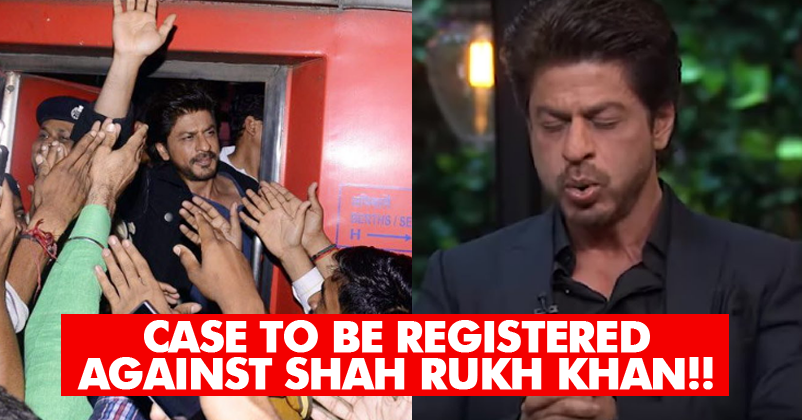 Shahrukh Khan might be the hero for millions of lovers but even he gets in troubles, and not sometimes but quite often. While most of the times it’s his statements that cause the problems, sometimes his own stardom becomes a thing to deal with. So when the marketing team of his last film Raees decided that SRK should do a Railway tour from Mumbai to Delhi, everyone was super excited. As the superstar left for the journey in August Kranti Rajdhani Express fans started collecting in huge numbers to get his look. Most of the intermediate railway stations were flooded with fans so controlling them became a challenge for local cops.

As soon as SRK and his fellows reached Vadodara, a sea of fans was there to get a look of SRK. The crowd went out of control which led to the death of a fan and injured two policemen. For the horrific incident that happened some months back, a report has been filed before the judicial magistrate in which the Deputy Superintendent of Police (Western Railway) Tarun Barot has suggested that actor Shah Rukh Khan and Excel Entertainment Pvt Ltd, which promoted his film ‘Raees’, be booked under IPC section 304a2 (causing death due to negligence) and sections of Railway Act in a case of stampede and chaos at Vadodara railway station on January 23 in which one person died. The police officer had filed his report on April 17.

As per what’s stated in the report which was shared by the lawyer of Jitendra Solanki, who had lodged a complaint, a horrific situation like this was created because SRK and his team ignored safety and security guidelines, and threw T-shirts and balls towards the people on the platform. Now that seems some serious trouble for Shah Rukh Khan. We wish he had kept his excitement aside and had given a little extra thought towards the things that day. But whatever happened can’t be changed now. It’s a wait and watch situation for SRK lovers right now.

The Amount Salman Paid To Auto Driver For Less Than 1KM Proves He Is “Sultan” In Real Life
12 Salman Khan Movies That Didn’t Release! We Bet You Don’t Know The List!