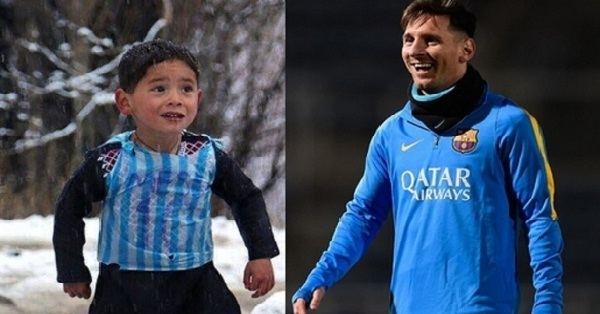 Barcelona star footballer Lionel Messi is keen to meet a 5 year old kid from Afghanistan. This Afghan kid named Murtaza Ahmadi from Jaghori hails from a small Taliban-controlled Afghan town is one of the youngest and die hard fan of Lionel Messi. Few days back his picture of wearing Lionel Messi ‘jersey’ went viral on social media which also made Messi keen to meet this kid. The story behind this kid is pure and heartwarming. This five-year old idolizes the Argentina star footballer, but his family couldn’t afford a jersey of his favourite footballer because of the volatile region they live in. When nothing worked making the boy joyous, his elder brother Homayoun who is 15 years old helped his younger brother by writing Messi’s name and his jersey number on a blue and white plastic bag which resembled Messi’s Argentina jersey and posted the photos of his younger brother wearing it on Facebook.

Soon, the pics went viral on social media and reached Lionel Messi. It was not a surprise when news broke that Messi is in talks with Afghanistan Football Federation (AFF) to set up a meeting with this five year old kid. Despite the talks, the meeting dates has not announced yet.

Murtaza’s father is a poor farmer in Jaghori district where it was impossible for him to buy a replica jersey for his kid. Adding to that, Murtaza has a punctured football which keeps him busy. Any kind of sport is a rare event under Taliban rule in the district. In fact the football stadium in Kabul is a venue for executions, stonings and mutilations.

Please share your thoughts in the comments section below.

Continue Reading
You may also like...
Related Topics:Guess WHY!!!, Lionel Messi Keen To Meet A 5 Year Old Afghan Boy

You Won’t Believe What Kohli’s Fan Is Going Through For Hoisting Indian Flag
15 Best Memes On #IPLAuction Are Here!!