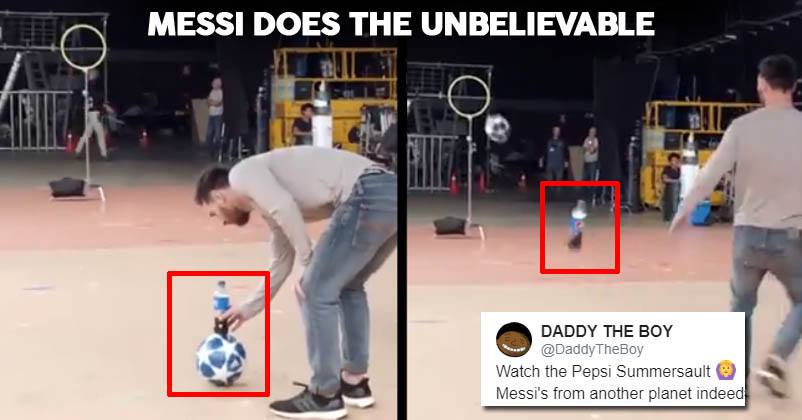 Lionel Messi is a superstar. Period. And now, a video of him performing a mindblowing trick shot is going viral for all the right reasons.

Recently, Messi posted a behind the scenes video of a Pepsi advertisement starring him, which shows him performing the trick shot. Basically, he places a bottle of Pepsi on a football, and then kicks the ball in such a way that the bottle lands perfectly on the floor.

I mean, its surreal. Normally, we could have dismissed it as fake, but come on, this is Messi and he’s capable of just about anything. That’s what netizens think as well. Check it out:

Let's settle this 👇 who did the challenge best Messi or salah
Retweet for Messi 👌
Like for Salah ♥ #PepsiMoreThanOK #Messi #Mosalah pic.twitter.com/rqv10VjI3M

Normally we'd be calling this fake, but then again, it's Messi 🐐
(via leomessi/Instagram) pic.twitter.com/wpvhYsqy4l

Watch the Pepsi Summersault 🙆
Messi's from another planet indeed#PepsiMoreThanOK pic.twitter.com/HOMhcMj9mr

Messi, he of perhaps the greatest left leg in football history…

Does something so ridiculous that u go “no waaaaayyyyy”

Not the accuracy. Not the bottle flip. But his what-did-you-think-would-happen face.
❤️

What do you think of his trick shot?