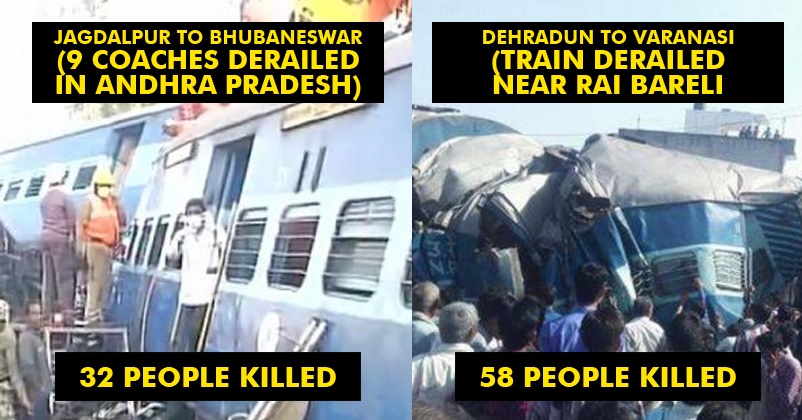 This article was something that I didn’t wish to write. Making listicles of such a topic doesn’t feel so good. The news of train accidents in India is something that no one can neglect as the majority of us still travel through this mode of transportation. And given the kind of rise in train accidents is going on, our probability of meeting such a fate increases too. Have a look at some of the train accidents that took place in the last 2 years. The incident took place around 7:35 AM on 13 February 2015. According to the reports, it was the boulder that may have been fallen on the tracks that led to the deaths of 12 people along with 100 injured people. The most destructive accident where a total of 58 human lives were lost and more than 150 passengers were injured. The reason for derailing was said to be due to brake jam. The accident took place around 9:35 AM on 20 March 2015. There were 8 coaches that were affected the most. The train was traveling from Rourkela in Odisha to Jammu Tawi. Around 4 people lost their lives and more than 50 people were injured. The incident took place around 2 PM on 25th May 2015. This train accident took place on 5th February 2016 at around 4:15 AM. There were conflicting reports about the number of passengers who were injured. Some claimed it to be 15 while some reported more than 40. The derailing took place between Somanayakkanpatti and Patchur of the Bangalore Railway Division.

5. Side collision of Chennai Central – Thiruvananthapuram Central superfast and a suburban train near Pattabiram. This side collision accident took place on 1st May 2016 at around 8:15 PM. The accident was caused due to the jumping of the signal by the loco pilot of the superfast train that caused structural damage of two compartments. 7 people were injured. This was perhaps the most deadly accident we had witnessed in the recent times (20 November 2016). More than 150 deaths and 260 injured people were reported by the leading newspaper The Times Of India. A total of 14 coaches were destructed in this mishap. This accident took place on 28 December 2016 where a total of 15 coaches derailed while crossing the bridge leading to 44 casualties. The accident spot was 70 KM away from Kanpur city. Perhaps the most recent one that took place on 21 January 2017 that resulted in 32 deaths and more than 200 injuries. The incident took place around 11 PM.
All the train accidents were majorly caused due to DERAILMENT. Derailment means when the train runs off its rails. However, it doesn’t necessarily mean that it leaves its track. Derailment can be caused due to the following reasons.

A majority of the reasons that have been mentioned are caused by poor maintenance by our Railway Department. This is the connection. Proper inspection of railway lines, machinery and drivers should be conducted on regular basis so as to avoid such accidents.
I hope and wish that in the coming future I don’t get the chance to further update this article. What are your views about this topic? Please share your opinion in the comment section below.

Man Who Predicted Trump’s Presidency & Brexit Has Predicted For 2017 & It’s Shocking
The Man Whom Atif Slammed For Molesting Girl Hits Back In Harsh Words, Says He’s The Victim