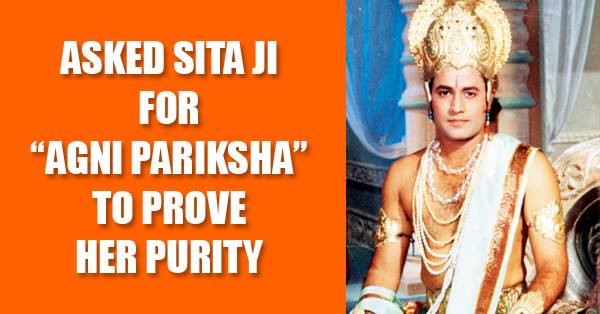 Lord Rama is one of the most revered Gods of Hinduism. He is considered ‘Maryada Purushottam’ in India and all over wherever he is prayed to. He is one of the most idealistic Gods of Indian culture. Even years after the happenings of Ramayana the Indians want their children to have nature and character like Lord Rama. I am a Hindu and I like him too as he was very good at whatever he did, here are 8 things that if undone could have made him the best. Should not have insulted a woman.

2. He killed Bali from behind As per the Indian Kshatriya Dharm one must challenge his enemy for a fight and not do a surprise attack from behind which Lord Ram had done.

3. Had ordered Lakshamana to disturb Indrajit in his prayer

Lord Rama had been told by Vibhishana that after the prayer to his native deity Indrajit would be invincible and thus he sent Lakshmana to break the prayer and fight with him at Yagnaagaar where Indrajit would not touch any weapon and would be most vulnerable. 5. Had sent Angad along with warriors to impure and extinguish the Yajna which Ravan was doing to win the war

6. Banished his wife Sita who was pregnant at that time at blabbering of a drunkard on her purity

7. Even when he was told everything by Rishi Valmiki and having given ‘agni pariksha’ before he had asked Sita to again perform the test of purity

8. He had once passed the death sentence on Hanuman when Lord Hanuman did not wish Vishwamitra on suggestion of Narada Muni Do leave your views in comments below.

Happy Dussehra to all