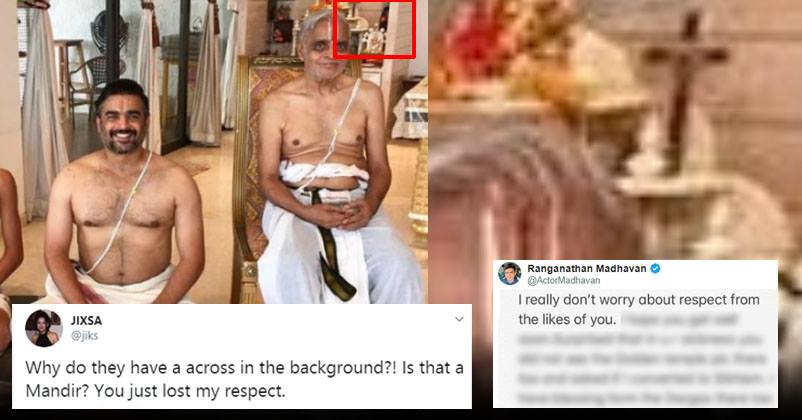 R Madhavan took to his social media handle on 15th August to wish his followers Happy Independence Day, Rakshabandhan and Avani Avittam by sharing a picture of himself with his father Rangnathan and son Vedant.

The picture grabbed the attention of an unwanted troll who zoomed deep inside the picture to create an unnecessary issue, stating the actor has lost all due respect in his eyes.

A troll managed to notice a cross kept in the background and slammed the actor for keeping cross inside his house and even went on to call him ‘fake’.

The twitter user wrote, Why do they have a across in the background?! Is that a Mandir? You just lost my respect. Do you find Hindu Gods in Christian churches? All this is fake drama you did today!

Why do they have a across in the background?! Is that a Mandir? You just lost my respect. Do you find Hindu Gods in Christian churches? All this is fake drama you did today! pic.twitter.com/w5mdrSKxRL

Madhavan gave a befitting reply and did shut down the troll, with a long note. Rocketry actor wrote, I really don’t worry about respect from the likes of you. I hope you get well soon. Surprised that in u r sickness, you did not see the Golden temple pic there too, and asked if I converted to Sikhism.

Madhavan said he has worshiped in Darga, Gurudwara when he failed to find temples around, I have prayed at every Darga, Gurudwara and Church. I have had the good fortune to visit when a temple was not around. They have shown me utmost love and respect knowing that I am a Hindu.

How can I not reciprocate that. All I have is a lot of love and respect to give as my vast travels and experience has proved, is the only true faith. Peace and love to you too, he concluded.

Netizens are rooting for R. Madhavan for giving a fitting reply to the troll and for respecting every religion.

Continue Reading
You may also like...
Related Topics:Madhavan, Madhavan Takes Down A Troll Who Slammed The Actor For Keeping A Crucifix At Home, R. Madhavan