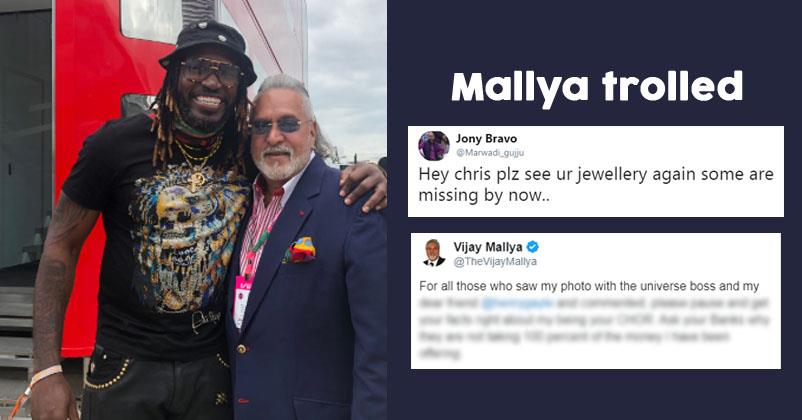 The Indian business tycoon Vijay Mallya is presently declared a fugitive by an Indian court as he has been charged with financial crimes. He is currently staying in London from where the Indian government wants to extradite him.

Mallya has been charged of defaulting bank loans of nearly Rs 9,000 crore; however, he claims that he is ready to return the whole amount but the banks are not ready to accept it.

Recently, the West Indian cricketer Chris Gayle met Vijay Mallya at the Formula One qualifying session at the Silverstone Grand Prix and uploaded a pic with him on the micro-blogging site Twitter. 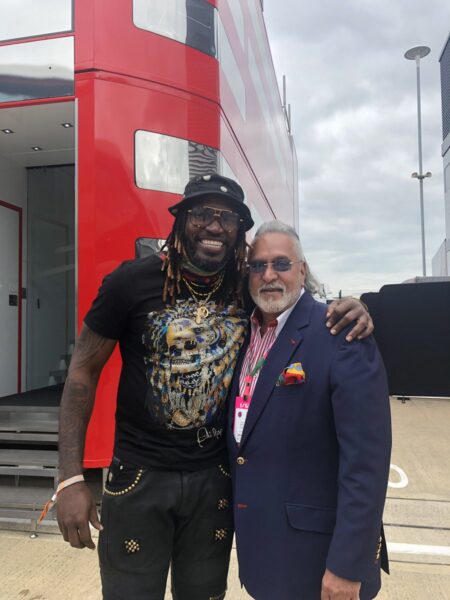 The caption that Gayle wrote while sharing the photo read, “Great to catch up with Big Boss @TheVijayMallya  cheers 🥂 #RockStar 👌🏿 #F1”

Just to inform, Chris Gayle has also played for the IPL team Royal Challengers Bangalore which is owned by Vijay Mallya’s organisation.

After Gayle uploaded his photo with Mallya, desi Twitterati got into action and started trolling Mallya by calling him a thief and asking Chris to be alert enough to save himself from the fraudster.

Don't share your account details with him and never make any transaction in front of him. And in case if he ask you emotionally for loan don't fall prey — Issued in @henrygayle interest😂😂😂

Indian Intelligence Officials would love yo say the same thing 😂

Hey chris plz see ur jewellery again some are missing by now..

Please courier him to india. Your will get a million dollar atleast reward.

Like u are the Universal Boss, he is our National chor, who has become Universal now.

I can't see mallya's other hand,
Gayle where is your Wallet 🙄🙄😂😂

Vijay Mallya was not in the mood of listening silently and he responded to trolls by saying that all those who are calling him chor (thief) should ask their banks as to why they are not taking full money from him which he is offering for the past one year.

This is what Vijay Mallya tweeted, “Great to catch up with the Universe Boss and my dear friend. For all those of you losers who call me CHOR, ask your own Banks to take their full money that I am offering for the past one year. Then decide on who is CHOR.”

Great to catch up with the Universe Boss and my dear friend. For all those of you losers who call me CHOR, ask your own Banks to take their full money that I am offering for the past one year. Then decide on who is CHOR.

This further resulted in him getting trolled more by the online users. Check out how Twitterati reacted over Mallya’s tweet:

Who is stopping you ? Do a wire transfer of entire amount to the lenders and then talk.

A thief cannot come back after years n say take this money i stole from you, now i am a free man

It is like returning the wrapper after stealing the candy and claiming yourself innocent 😂. #mallyachor

A thief returning the stolen money doesn't make him less a thief.

You don't offer the money. You give the money back. You can't offer what is not yours. pic.twitter.com/g8T9toCHRb

John Cena Shared Shilpa Shetty’s “Stone Cold” Picture, Here’s What The Actress Has To Say
Sanjay Manjrekar Trolled For His Acknowledging Tweet After World Cup Is Over