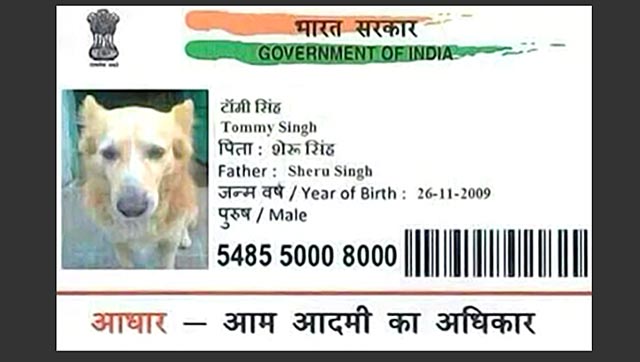 In a funny yet serious incident today a man got arrested for issuing an Aadhaar Card on a Dog’s name. The incident is from a small village of Bhind District, Madhya Pradesh. The said man Azam Khan is said to have issued an Aadhaar Card on a Dog named Tommy Singh. The Aadhar card contains the details such as Name of the Dog i.e. Tommy Singh, Dog’s Father i.e. Sheru Singh, His year of birth and his gender. The entire incident came into picture when the residents of the village after facing troubles getting the Aadhaar Cards from the agency supervised by Azam Khan. Police in the reports said that the Man has been issuing such Aadhaar Cards on the Names of other animals too.
The man has been arrested under the charge of Forgery.

Continue Reading
You may also like...
Related Topics:Aadhaar card, Dog