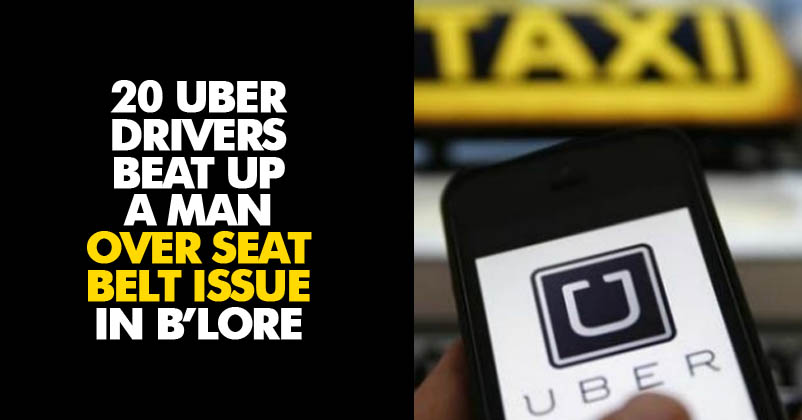 We all opt for Uber and Ola cabs just for comfort and safety. In normal Kaali-peeli cabs, we have heard of many incidents happening with people, be it men or women. However, the same is being repeated with men as well.

A recent incident of Uber has shocked us to the core. A 48 year old man Dave Banerjee has reported a gruesome incident of him being beaten up by 20 Uber cab drivers, just because he asked for seat belts.

Yes, this happened near Kempegowda airport (Bengaluru) on Monday night. Is it right to assault someone just because he asked for seat belts? Well, he said that he complained to Uber but they failed to take any action. As of now, he hasn’t lodged any complaint.

He suffered from injuries after being beaten up so brutally. He took to Twitter to share the pictures;

In the car, Dave couldn’t find rear seat belts. Since he’s very particular, he asked the driver to stop the cab and give priority to seat belts. The driver paid no heed to him even after repeated reminders. Somehow he managed to get out of the car but this is when he got assaulted. Dave said,

“What followed next was utter mayhem. For more than 45 minutes, over 25 drivers surrounded us and attacked us. I was injured, and so was one of my colleagues.”

Dave lashed out at Uber and said;

What did you guys do when I called your SOS? Why don’t you share that recording on Twitter? #Uber is a menace to the society.

“You know how it is that the cars in India don’t have seat belts in the rear and the during the cleaning they get pushed in the seat. I asked the driver to stop the car so that I could pull out the rear seat belts. After asking him to stop twice, I simply tapped him on the shoulder and said the same. Then, I got into the trunk to push the end out from between the seats. I don’t know what happened. He got angry, called fellow people while saying something in Kannada probably something on lines that I attacked him. I don’t understand the language. Two of my colleagues and I, started walking towards the Uber bay to book another Uber.

A mob of around 20-25 people were checking each car to see if I was seated in that or not. And, when they spotted us, attacked me and I was beaten by them and so was one of my colleagues. The beating continued for close to 45 minutes”

Dave even lashed out at Uber for not being responsive. He called Uber SOS, but got no response from them. Later, Uber called up and apologized for the inconvenience and this is when Dave told them that it’s not “Inconvenience”, he was “Beaten up”.

Uber has released a statement which reads,

“What’s been described has no place on our app. Safety of our riders is a priority for us at Uber. We have barred the driver-partner’s access to the Uber app. We will support the law enforcement authorities in their investigation and proceedings in any way possible.”

This is really concerning and Uber must do something about it. Don’t you feel so?

16 Most Commonly Used English Words That You Have Been Pronouncing Wrong All This While
Durex Wished Happy Children’s Day On Facebook While Promoting Its Brand, Got Trolled By Users