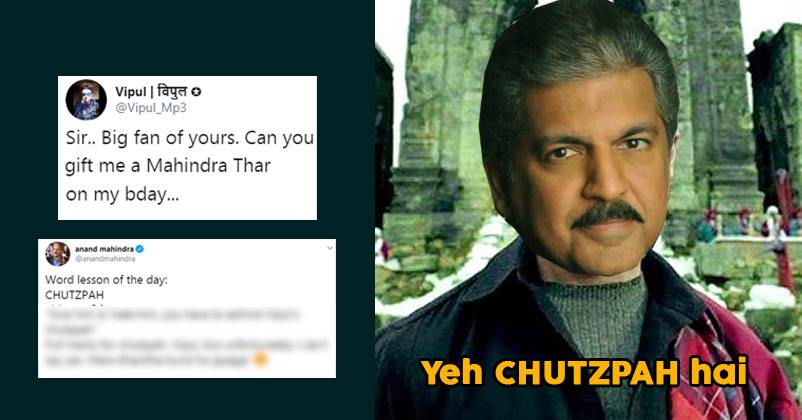 Anand Mahindra, the chairman of Mahindra group, is pretty active on social media networks and he has gained a huge fan following because of his wonderful tweets. He likes to encourage the local talent and also tweets about the new innovations that are being made in the world.

On Friday, the business tycoon was contacted by a fan who asked him to gift him a Mahindra Thar on his birthday.

The name of the user is Vipul and he tweeted,

“Sir.. Big fan of yours. Can you gift me a Mahindra Thar on my bday…

Sir.. Big fan of yours. Can you gift me a Mahindra Thar on my bday…

However as it was not feasible, Anand Mahindra not only refused to do so but also gave him a lesson about an English word and his style will surely make you his fan.

Anand Mahindra talked about the word “CHUTZPAH”, explained its meaning and used it in a sentence as well. He also says that if he does what Vipul has asked for, his business will shut down.

This is what Anand Mahindra tweeted,

“Word lesson of the day:

“love him or hate him, you have to admire Vipul’s chutzpah”

Sir, I thought you have started giving vocabulary lessons – 'jhakaas' and now 'chutzpah' 😁

Brilliant one #CHUTZPAH
Reminds us about this scene from Haider pic.twitter.com/T7dxFyFM7v

Vipul made this tweet in response to a tweet made by Anand Mahindra in which he talked about nicknaming the buses manufactured by his company as Tom Cruzio as it was Mission Possible.

He tweeted, “And perhaps we can nickname the Bus Tom Cruzio… but this movie’s name is Mission Possible…😊”

And perhaps we can nickname the Bus Tom Cruzio… but this movie’s name is Mission Possible…😊 https://t.co/ZEALdDoJ55

Anand Mahindra is known for giving witty and prompt replies and this reply once again proved that he has a great sense of humour. You won it sir!