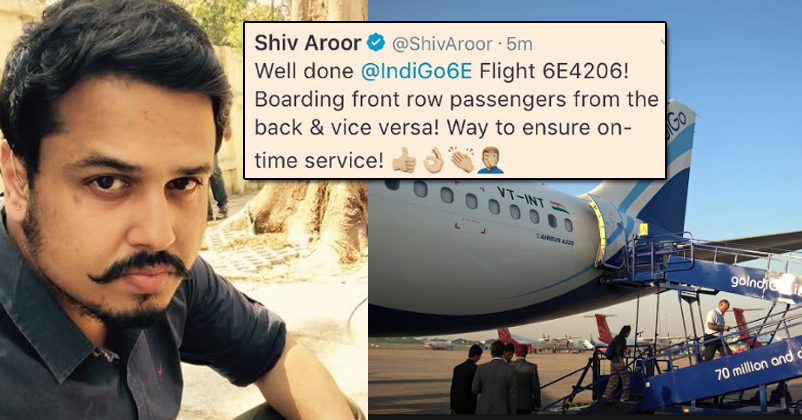 Nowadays, having a flight journey has become one of the most inconvenient experiences. It becomes even more worse when travelling with our local Airlines. Their services at times leave us wondering whether we are travelling in a flight or in a local train.

In a recent such experience, Shiv Aroor, India Today’s defence correspondent, had to suffer some serious inconvenience while boarding an IndiGo flight. Shiv Aroor took to Twitter to express his frustration on IndiGo Airlines in a rather sarcastic manner. The flight Shiv was boarding Flight 4206 had a strange way of boarding passengers. The front row passengers were boarded from the back while the back row passengers were boarded from the front. This mess up from IndiGo Airlines left Shiv all the more furious as he was supposed to cover a story urgently.

This is what Shiv tweeted to IndiGo Airlines regarding the inconvenience he faced while boarding a flight. He chose to remain sarcastic to express his frustration!

Shiv’s frustration went sky-high when IndiGo Airlines failed to understand the sarcasm in his tweet and rather thanked Shiv for his ‘positive’ feedback. This reply from IndiGo was enough to prove that their twitter handle was even more messed up than their flights!

Thanks for kind words, Shiv. We wish you a comfortable flight. 🙂

While this massive goof up from IndiGo’s Twitter handle left twitteratis rolling in laughter, Shiv Aroor was left speechless. He was confused what made him more angry now, IndiGo’s service or their reply to him. Shiv yet again took to Twitter to post a screenshot of IndiGo’s reply and maintained his sarcasm with the caption ‘Deleting my account’!

The initial mess up from IndiGo Airlines was followed by some more delay which meant that it was time for Shiv to get angry directly now!

By the time IndiGo Airlines figured out the sarcasm of Shiv’s tweet, twitteratis were busy having a good laugh on them!

"land safe" n sound is the only service u should expect from indian careers n aviation sector! Bhagwan bharosee!!

haha…Way to go for understanding sarcasm too.

Sarcasm is not for everybody, Shiv 😁

Haha! Now drown in your own tears of joy

After almost an hour, IndiGo Airlines finally had their twitter handle sorted at least! They apologised for the inconvenience and finally ended the goof up!

Apologies! for the above tweet. It was an human error from our end. We've noted your feedback & will share this with our >>

We just hope IndiGo Airlines get their services sorted soon and make sure their passenger’s ‘safar’ doesn’t get changed to ‘suffer’. Do let us know if you too had an annoying flight experience with any airlines in our comments section below.

German Lady Was Harassed By A 14 Year Old Boy! What She Did Next Was A Lesson For Him!
Policeman Snatched Away His Bike’s Keys For No Reason, What He Did Next Was Simply Amazing