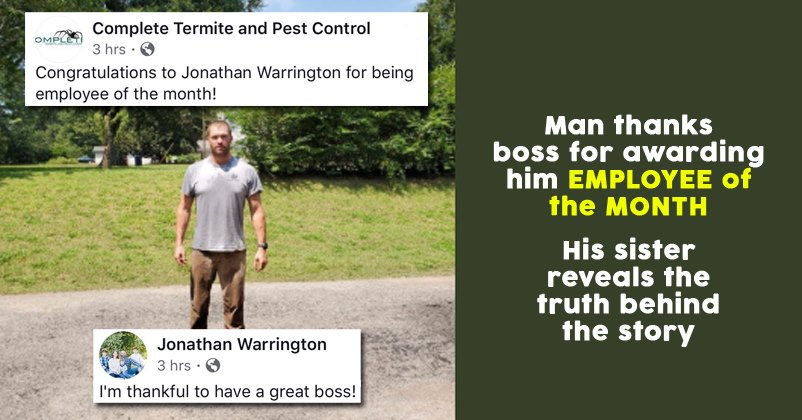 No matter how many sad people you meet, the world has happier and self-satisfied people more. While there are some who have everything and yet their complaints never seem to end and then there are those who are happy with whatever they have and they know how to love and pamper themselves.

This man from named Jonathan, Tennessee, USA shared his picture announcing that he has won ‘Employee of the Month’ award at his workplace recently. He looked very happy in the picture and his friends and family congratulated him on his big success.

Congratulations to Jonathan Warrington for being employee of the month! Jonathan will get a 3 day and night all expense paid hunting and fishing trip to Arkansas for his hard work!

Jonathan’s picture looked very normal until his sister decided to make big revelation related to his award. His sister took to twitter and with a screenshot with Jonathan’s Facebook post revealed that her brother owns the company and is literally the only employee in it.

This is my brother’s page.

He owns his own company.

He IS the boss.

He’s literally the only employee. pic.twitter.com/3SpKekH80D

When the people came to know about it they hailed the man for his self-appreciation. People said that others should learn from this man how to be contented and happy with ourselves.

I am self-employed and I am taking notes. How have I never recognized myself as employee of the month before?!

Your brother giving himself employee of the month pic.twitter.com/0ovmLCbOmZ

Your brother out here teachin us all how to live pic.twitter.com/bCNameXNTv

As a small business owner, I look forward to the day I can reward my employee like this. XD

That's awesome, your brother is hilarious! He's definitely not wrong! Tell him to try for a 2nd month as #employeeofthemonth
😁🤣🤣🤣

What kind of company gives all of their employees a vacation at the exact same time? Rhat seems like a huge problem in case of a work emergency.

My dad does this shit all the time. He owns his own business and whenever we go on vacations he says “idk I’ll have to talk to my boss” and when my brothers consider going (they work for him) he says “your boss is so nice I’m sure he won’t care!”

When he's talking alone in a room, does that's mean he have a team meeting?

This is the level of self love that I want to have..

Continue Reading
You may also like...
Related Topics:employee of the month, Self-appreciation, self-employed boss