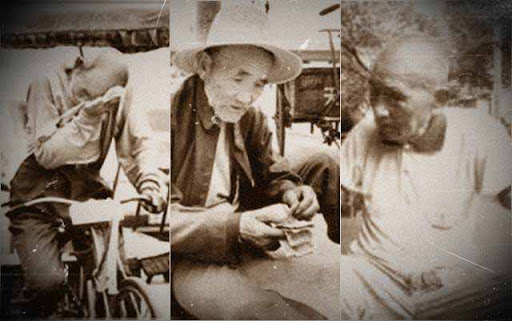 When you take a look at Mr. Bai Fang Li, in his last years, you will see a man past his prime. Old and frail, waiting to breath his last breath.

Take a closer look into his eyes, and you would see a light. A light that only belongs in the eyes of the content. Mr. Li was content, indeed.

Mr. Li peddled a cycle rickshaw all his life. But there was something different about him.

He used to peddle rickshaws wearing old, torn clothes. Clothes that a vagabond or a beggar would wear. He never bought any clothes, wore different socks at all times. But why is he wearing old clothes and socks when he could afford new ones? Here’s why.

Mr. Bai Fang Li, donated all his earnings as a rickshaw driver to fund more than 300 poor students for their education and living expenses, hence helping them complete their studies! He never bought any new clothes, he just picked up old, used clothes people threw away at dumpsters. His children often questioned his habit of doing so, he replied, “What is so hard about this? This bun is the product of the farmers’ hard work. People throw it away; I pick it up and eat it; isn’t this a way to reduce wastage?”

Mr. Li saved on food and drinks throughout his life, barely had any expenses. So that he could help others out.

source
The distance Mr. Li has peddled all his life is roughly equivalent to circling the Equator 18 times! He has never expected any sort of reward for this either.Mr. Bai does not keep any list of children he has helped to be educated. He only has a photo with a group of students. On being asked what he expected from his students, he replied that he only wanted them to study hard, get a good job and give back to the country!

Mr Li has approximately donated about 350,000 Yuan for the education of children in his lifetime, which is valued somewhere around 35 lakh rupees!

When he was unable to pedal rickshaws anymore, he started looking after people’s cars at stations. And he donated whatever he earned from that too!

Mr. Bai Fang Li passed away in 2005. More than a hundred people turned up at his funeral and mourned the passing away of a great, great man!

There’s one power we all have. The power to give. Never hesitate in helping someone less fortunate than you. Their needs are greater than your wants.

There is no greater virtue than compassion.

Mr. Bai’s compassion is a beacon to guide all of us. We salute Mr. Li’s generosity. And we applaud what he’s done for his country.

5 Pataks We Love Blowing Up On Diwali
10 Funny But Creative Inventions!!!