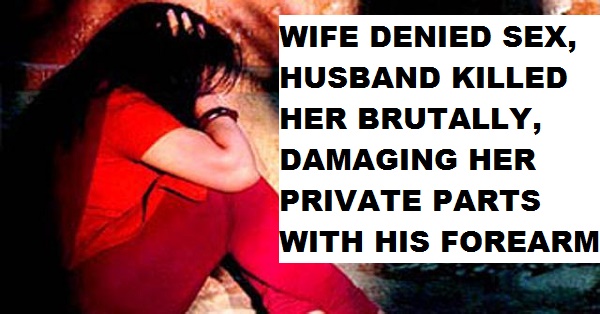 The bizarre incident took place in the Nariyawal village of Bareilly where a man is accused of killing his wife for the reason that she denied having intercourse, as reported by the cops. The man kept on sitting beside her body and consuming alcohol for more than 6hrs till cops arrived at the location and took him into custody.

In accordance with cops, Rajiv Sharma, the accused, was filled with anger to such an extent that he murdered Meenu Sharma, his wife. What’s more, they have a son of 10 yrs and the victim’s elder sister who also resides at the similar area reported of the happening.

In the words of CO Santosh Kumar, “When we reached the spot we found the deceased’s body lying in a pool of blood with the accused sitting next to it, on the bed.” Not only this, officials also faced difficulty to persuade the accused for opening his home’s main gate.

SO Rajbeer Singh stated, “There were no external injuries on the body but there was a lot of blood.”

As per cops, the accused accepted that he murdered his wife. It so happened that he “inserted his right forearm in his wife’s private parts which resulted in her death”. The investigating official stated, “He has said so but we are awaiting the post-mortem report to ascertain the exact cause of death.”

On Saturday, the man was presented in lower court and as reported by Singh, “The court has ordered a remand of 14 days.”

Mangli Prasad, their tenant, informed, “I was sleeping when the incident happened. They used to fight a lot. Apart from that I don’t know anything.”

What is your opinion in this connection? Doesn’t a woman have her own wish with regard to making physical relationship even if the man is her husband? Aren’t they given freedom or right to rejection? Share your views about it in the comments section below.

This Naked Display Of Status By Drunk Lads Everyone Must Watch
BJP Sold MLA Ticket To Shahabuddin’s Shooter For Whooping Rs. 2 Crores