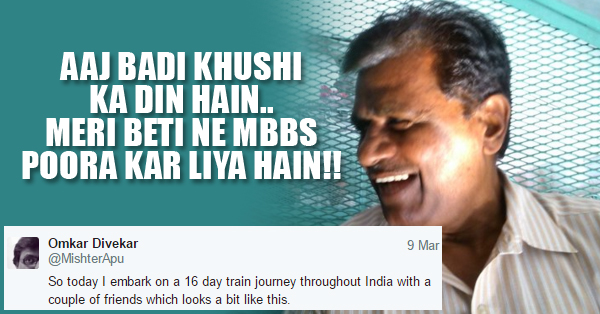 Indian train journeys are a different experience in itself even though they can prove to be quite cumbersome at times. However, Omkar Divekar, a photographer from Pune has taken a 16 day train journey from India. Instead of blogging, he is live-tweeting his journey. These tweets of MishterAppu (Omkar’s twitter name) would definitely enthrall you.

And he begins his journey

So today I embark on a 16 day train journey throughout India with a couple of friends which looks a bit like this. pic.twitter.com/3nQRik7Jxx

Will get into general compartments

We'll be trying to get into the General compartments whenever we can, converse and engage with people all over India.

And we are off! Next stop, Okha. For now, it's goodbye Mumbai! 😀 pic.twitter.com/QJ4mctfXki

The general compartment, right now. Feels like anything but general to me. pic.twitter.com/icxvKprZ9j

Describes the emotions too

Say a hello to Gujarat

And we have hit the salt pans of Gujarat! Reaching Dwaraka in a few minutes. pic.twitter.com/ULkNW3ojMA

No permission for photographs

After being disallowed to photograph at the Okha Port, we took a stroll around and found this near the station. pic.twitter.com/fiV68F9Upz

Day 3 of our journey & we have a problem. Our bookings aren't confirmed so we'll have to travel general to Delhi! 😀 pic.twitter.com/1bTCseUERd

Not full but not quite empty either. Our general dibba right now. pic.twitter.com/vviymC0Fb6

Have a look at our Delhi to Okha train

Since I forgot, this is our train to Delhi from Okha. pic.twitter.com/0JIfzBHscM

Just had some lovely dhokla and puri sabji that we had picked up from Rajkot station. #RailKahani pic.twitter.com/DROSFVieHc

As of now, Omkar is on his way to Delhi, after which he would go to Vaishno Devi and Baramulia. We are very excited to know more about his journey.

About an hour ago, we entered the third state in as many days and celebrated with some Abu Road ki Rabri. #Rajasthan #Unreserved

Continue Reading
You may also like...
Related Topics:16Days train journey, This Man Has Live-Tweeted His 16 Day Indian Train Journey! The Internet Has Gone Crazy With It!

You Would Be In Tears Once You Know The Reason Why Dhoni Collects Stumps After His Win!
These 18 Hilarious Messages To People According To Their Name Will Make You Go ROFL