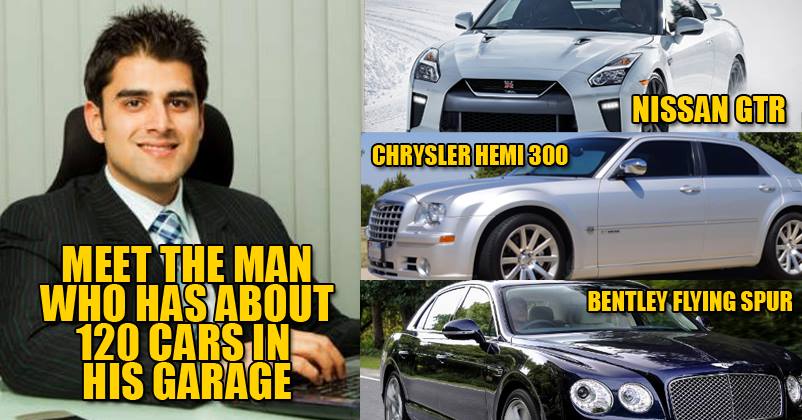 A simple car like Wagon R parked outside a common man’s house has the potential to make him feel proud of his wealth and his social status. I wonder what goes inside the mind of this 27-year-old managing director Shrenik Ghodawat, when he sees a freaking collection of 120 super cars parked in his garage. Must feel good. Shrenik Ghodawat is the Managing Director of Ghodawat Energy. His passion towards the collection of such supercars began because his father who started the collection way back from the year 1994. However, their tastes in cars are quite different. His father Sanjay Ghodawat’s passion has shifted to sedans and SUVs while his love is still for super cars. His amazing and yet controversial equation sets it straight – 3 Sedans = 1 Super car. Being the chairman, he gets his way while buying a car. But yes, if they buy three sedans, then they always make sure to buy at least one sports car for setting the equation. Shrenik Ghodawat has a 25% of the cars that he and his father buy. There is reason why dad is always THE DAD ! ! The love for cars in Ghodawat’s family is hereditary. Shrenik’s grandfather had it and his son Sanjay Ghodawat took this to another level which is now being followed by his son. Shrenik’s first car to try his hands on was manual Maruti Swift car. Just like every normal dad, Sanjay Ghodawat was too nervous to hand him one of his good cars. Some of the cars under his umbrella include Bentley Flying Spur, Range Rover Vogue Evoke, Nissan GTR, Porsche Cayenne Boxter, Lincoln limousine, Cadillac STS, Jaguar XJ and XF, Chrysler Hemi 300, Mercedes S, SL, GL and E class, BMW 6 and 7 series and Audi A8, Q7 and TT models. It is interesting to note that he bought many of these way before they were officially sold in India by importing them from many countries. When it comes to speed, his white Nissan GTR and Red Ferrari 360 are the ones to beat the time and when it comes to comfort and luxury, nothings beats the Mercedez. The most prized ride is the Rolls Royce Phantom. According to him his entire family was thrilled when they bought it. But if we think about this car collection in a practical way, maintainance cost of such high end cars can easily fetch us a brand new luxury car in itself. However, jokes apart, Shrenik has a dedicated team of mechanics who constantly keep a check on these cars by cleaning, oiling and revving up the engine on daily basis.

Being a responsible citizen of India, Shrenik doesn’t take risk of driving these cars at high speed on Indian roads as the country doesn’t have the infrastructure to drive super cars at great such speeds. He usually tests his new cars on the NH4 highway and that too at night around 9-12 pm And even during that time, he doesn’t push his car to its limit as it’s not safe. Isn’t his car collection amazing ? Well, to be honest, I haven’t seen one in real life but they definitely sounds good (average person’s life in short). If you have any opinion about this topic, feel free to share it with us in the comment section below ! !

Unprofessional Side Of Aamir Khan! Kept A Movie On Hold For 4 Years & Then Refused!
We Bet You Didn’t Know These 10 Unknown Facts About Mouni Roy!