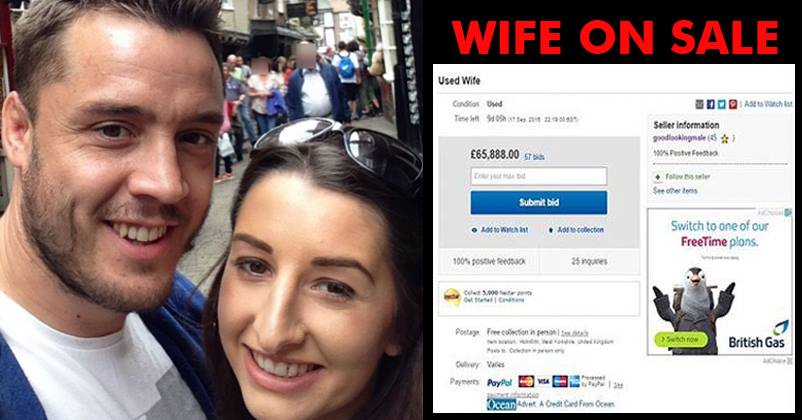 Disclaimer – Now before some other website starts accusing us to promote such a heinous and degrading news out in social media, let me just clear the air by saying that if you don’t get the humour, better don’t react on it. Oh wait, I just forgot the fact that people who don’t get the humor are the ones who react to it.

A 33 year-old man named Simon O’Kane from Yorkshire decided to put his wife Leandra on an auction site eBAY as a joke. When asked about the reason, he smirked by saying that she didn’t empathize while he had a sour tongue. What was more hilarious was the way he had put up his wife on the auction site that managed to grab many eyeballs. He went on to add a “welcome offer where he may consider a part exchange for a younger model”. Here are some funny and notorious points that he quoted in his AD. Body work and paint work still in decent shape and has some skills in the kitchen.

1.Often makes this noise that can’t be silenced unless you order brand new shiny parts of metal.

2.Sometimes them skills in kitchen results in you ending up in the hospital.

The hilarious idea of putting up her on sale came into his mind while he was suffering from a mild fever after he came into his house from office. According to him, his wife showed a formal and a casual concern for him, which made him to perform this act.

However, when his wife got to know about his deeds she was indeed very angry as “Everyone at work saw it and were laughing their heads off”. Well, her anger is indeed justified but what comes next is something really hilarious. She is disappointed with him as he used an ugly picture of her for the sale ! Well, this explains a lot about women. She went on to add, “He always moans, then he swans off to the gym for three – four hours at a time. I told him if that if he can go to the gym then he doesn’t deserve my sympathy.”

Surprisingly, this funny prank became a hit and got a bidding amount as high up to Rs 60 Lakhs. However, before the amount could go much higher, it was soon removed by eBAY on the grounds of violation of its policies. When asking about the auctioneers response, Simon admitted that there were indeed some cheap and pervy messages that popped into his account for his wife, but most of them were funny. He appreciated his wife for bearing his nonsense pranks and still taking such jokes in a sporting manner. He said, “I’m really lucky that she’s such a legend and takes all my pranks on the chin. I was disappointed the listing was taken down, mainly because I wanted to see how high it would go, but it was a for laugh so I wasn’t actually gutted. It wasn’t like I’d actually let someone have her – she’s too good.”

This couple is indeed giving us many #RelationshipGoals ! !

Despite Too Many Precautions, Pics Of Bahubali 2 Set Leaked! IT IS HUGE !
Here’s Why Hrithik Is A Very Big Fan Of Dipa Karmarkar! You’ll Be Inspired Too