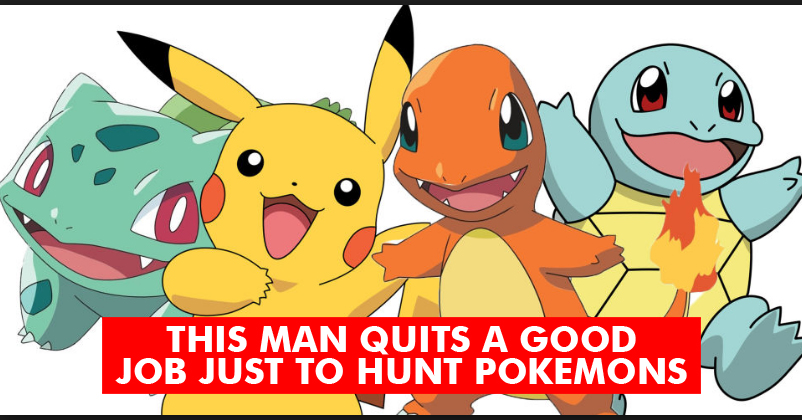 So by entertaining a slightest possibility that you haven’t heard of the game ‘Pokemon GO’, let me keep this short for you. Its a freaking viral game which is way much bigger than you can imagine, shattering every record that were possibly built.

I still feel nostalgic whenever I see Pokemon goodies and smirk while I think about my childhood dreams of becoming a Pokemon Hunter like ‘Ash’. Definitely our parents went through a lot to handle us and our kiddish demands of owning a ‘Living Pikachu’ like creature.

10 Years later, the same kid ( Not talking About Myself ) took it quite seriously and is now a full time Pokemon Hunter. Thanks to ‘Niantic Company’ for making his dream come alive. And hats off to this guy for following his heart. The guy’s name is Tom Currie. He is from New Zealand. He has quit his job as a barista and bartender at a seaside restaurant to become the world’s best Pokemon Hunter, which I think will be quite easy for him, given the fact that there are currently ‘NO’ Pokemon Hunters other than him.

Speaking to BBC News, he revealed that his parents are “a little baffled” at the idea, which I think is quite normal and obvious. He also added, “When I resigned, I didn’t tell my manager I was going out into the”. Generally if you are about to leave your job for some unorthodox reason, you do expect your boss to be quite ‘ WEIRD’ and ‘RUDE’, but this time it was different. Tom added, ‘But after my story got picked up I gave him a courtesy call. I got an absolutely lovely response, ‘Good on you Tom’ .It is really funny. I hope everything is OK. Have fun for your Currie had caught 91 of the 151 Pokemons available in the game’

Now here is a thing which is quite interesting. It was quite difficult for Farhaan from 3 Idiots to convince his father about what he really wanted to do in his life, but this guy’s luck was written by a golden ink. His father was quite amused by his decisions but later on sent him a text which read, “I always knew you would be famous.”. Quite a good Bollywood movie script in itself. Right ? ? According to him, the best part about the game is travelling and kindness that people are showing towards him.

Later on he also added, “I have been approached by a few other Pokemon trainers who recognised me and wanted a chat. I have had people asking for photos and one guy even called me his hero. I have received messages on Facebook from around the world, messages of support from America, Ireland, Canada, India and Nepal. The plan for after catching them all?” Now, one thing is for sure that he is not the only one who has taken this decision. There are a lot more. It will be interesting to see what future holds for them.

When the reporter asked him about his plans after he completes catching Pokemon, Tom said, ‘When I finish the trip and get back to Auckland, I will be looking for work and working on my new business. And of course still catching Pokemon.”

Well, we should admit about his passion that he has for the game, but isn’t it just too much to leave the practical world and try to live in world where such creatures don’t exist ?