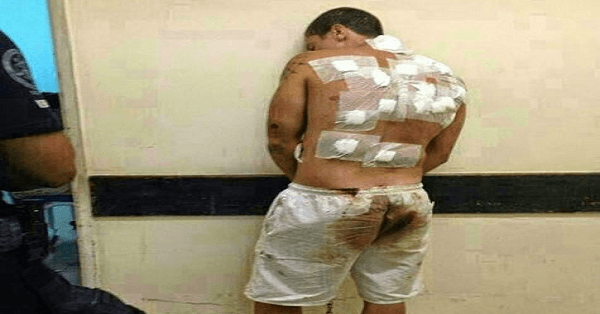 A man from Tanguatinga, raped his 18 month old step-child, surrendered to the authorities, went to the jail and got raped by the prisoners ‘twice’. Horrifying isn’t it? The man, 25 year old Daryell Dickson Meneses Xavier, who is a martial art preceptor, was held in slammer after he conceded raping his step son. The child couldn’t take the physical trauma and incontestably died. After the culprit was detained inside the prison, the other captives assured to make the rapist taste his own medicine by doing what he had done to his child.

They beat him demonically and raped him causing multitudinous injuries and bloodletting. The white pants that he was wearing had turned red and his private area was severely mutilated. Xavier was brought to the medics and was treated suitably. His wounds were stitched in the back and the private area. But the boorish prisoners were still not done with their barbarity. They tore apart his wounds and stitches and raped him once again.

Is this justified folks? Well if you ask me, the eye for an eye principle doesn’t work here at all. This is not going to make any difference. What did raping the man two times prove? Did that give us a solution to this impenetrable rape issue that has been around since the beginning of the time? According to me such people, both Xavier and the prisoners, should be kept in proper mental rehabilitation centers and their brains should be thoroughly studied and dealt with.  Xavier committed a horrendous crime by raping a baby who hadn’t seen the world yet. He killed the child just for the sake of his famished pleasure. People like him, make women scared of men and warn their little girls to stay away from strangers. Such people are not concerned with anything, be it age, physical appearance, seduction, anything. Sex in any form is all they need.

On the other hand, raping a person because he raped someone is equally barbaric. I know many of us support ideas like the rapists should be castrated or similar things, but this my friend is conveying a very inappropriate and ill-fitted message to common people. This is only bound to promote brutality, and inhumanity. We could see the issue getting too sensitive and confusing. It has a potential to divide the population into two lots: one in favor of what the prisoners did and the other against it. What are your thoughts guys? Leave your comments below and let us know. Feel free and express yourself.