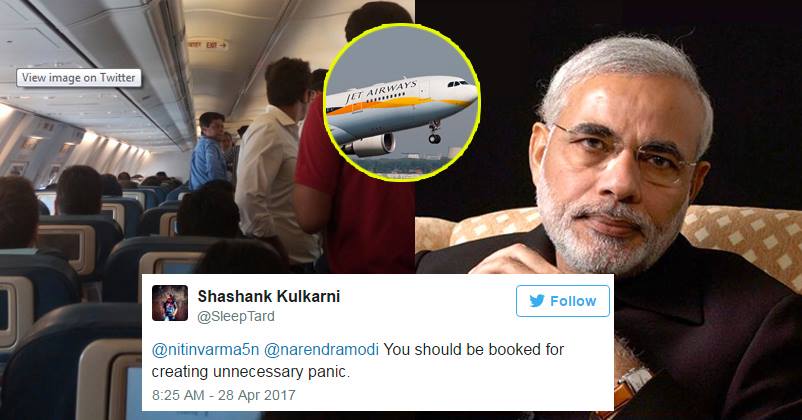 We often take our freedom of expression for granted. Social media has become a platform for expression of thoughts and opinions and some people have totally misused the platform for all the wrong reasons.

One has to be very careful with what they express on a platform that is exposed to the entire world. Just for the sake of it, people post on Facebook and Twitter.

The recent Twitter mishap is all thanks to one such user who miscommunicated on the platform to stir a wrong action. Nitin, a passenger on Jet Airways tweeted something that literally isn’t funny.

His flight which was supposed to land on Delhi got delayed and was diverted to Jaipur. The wait was as long as 3 hours. After that, the passenger tweeted something without actually knowing its aftermath.

He tweeted, “@narendramodi sir we have been in jet airways flight for past 3 hrs, looks like hijacked, pl help 9W355”

Instead of asking any flight attendant or crew member, he did this insensitive thing and created a fake panic. The Indian security authorities came across the tweet and took it seriously. There was alert at Jaipur airport after he tweeted.

However, Jet Airways took note of it and gave out the right information to the authorities and they even made Nitin understand the reason behind the delay.

Hi Nitin, our flight 9W 355 has been delayed due to air traffic congestion at Delhi.

We're awaiting ATC clearance. We'll have you on your way asap.

The people, however, isn’t much impressed with Nitin’s tweet, they thought it is not acceptable to create such panic that too regarding a serious issue like security in our public place like Airport.

You should be booked for creating unnecessary panic.

Seems illiterate .
Colloquially it is said like that .
When translate Hindi to English such disaster happens .
Should be let off

This gentleman should be taken to task for this kind of bullshit false alarms.

You got to be kidding us for sending out such senseless tweets to the PMO India!

Such kind of acts shouldn’t be encouraged at all, what do you all feel? Let us know in the comment sections.