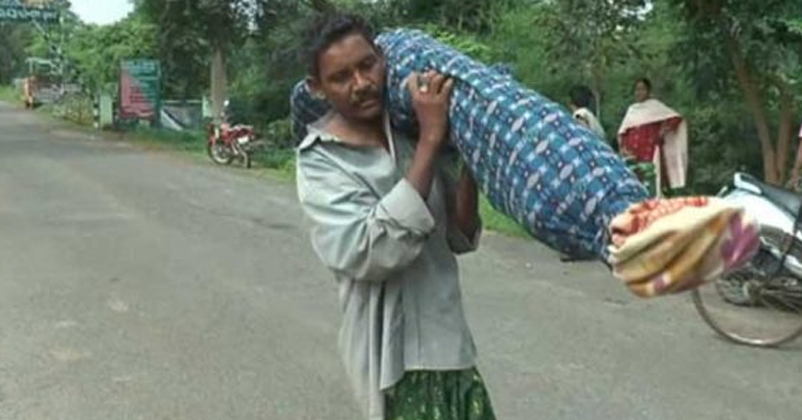 A man is not just a man when he starts his own family. He is a husband, a father, a companion, a friend and at last the only person in the entire universe who can’t see you sad. His emotions and love for you is never ending and he can turn the world upside down just to bring a smile on your face. One such man’s name is Dana Majhi and his story is something that will put our heads down in shame.

All the schemes and the programs launched by various NGOs and Government Organization can be summed up under this picture where a Tribal man along with his 12 years old daughter is seen carrying the dead body of his wife wrapped up in cloth. The whole incident took place in the state of Odisha. On Tuesday night, his wife died who was suffering from Tuberculosis at the district headquarters hospital at Bhawanipatna. On Wednesday, after he got know about his wife’s demise, being financially weak, he asked for an Ambulance from the Hospital Authority so as to take her back to her village which was nearly 60 KM away. Now under such a situation, the Naveen Patnaik government recently launched the ‘Mahaparayana’ scheme in February which offers free transportation of bodies from government hospitals to the residences of the deceased. Forget about helping him by giving him what we deserve, the Hospital Authority didn’t even listen to his plead where he requested them to make an arrangement for the Ambulance.

“I told the hospital authorities that I am a poor man and cannot afford a vehicle. I kept requesting them but they said they could not help,” Mr Majhi said to a television crew that found him after he had walked about 10 km with the body.

And at last, the only option which was left was to carry his wife’s dead body on his shoulder and walk. The very same walk which they decided to travel together for the rest of their life. The very same shoulder where she had laid down her head and relaxed in peace.

However, after the TV crew spotted this man along with his 12 years old daughter carrying his wife’s dead body, they immediately called up a senior officer who arranged an ambulance for the remaining journey to his village. Watch the video which was shot by the TV Crew Members.

However, Kalahandi’s District Collector Brunda D has a different story to narrate. According to her, Majhi left the hospital in the middle of the night without informing anyone. “If he had asked for help, we would have provided it,” she said.

After this sad incident, Baijayant Jay Panda, Member of Parliament of the state’s ruling Biju Janata Dal (BJD), tweeted about the positive changes made into the scheme.

[1/2] Despite much progress in Odisha's health sector, y'day news of a man carrying his wife's body for more than 10km was awful. Meantime..

[2/2] A plan had been in the works, today CM @Naveen_Odisha launched "Mahaprayana" scheme w/12 hearses for dist hospitals. Will be expanded

Are we really developing ? Are those numerical figures with graphs rising high till the skies really true ? What I can see is that a man carrying his dead wife on his shoulder and walking for straight 10 KM because he was so poor that he couldn’t afford an ambulance. No matter how many changes you put in, if they are not implemented at the ground level, THE LIVES OF PEOPLE AND THESE CHANGES ARE OF NO GOOD USE. You can’t bring his wife back, but can certainly deliver the respect that He and many other people are deprived off.

Continue Reading
You may also like...
Related Topics:Body, daughter, dead, man, odisha, shoulder, This Man Walks 10 KM Carrying His Wife's Dead Body On His Shoulder Along With His Daughter, walks, wife