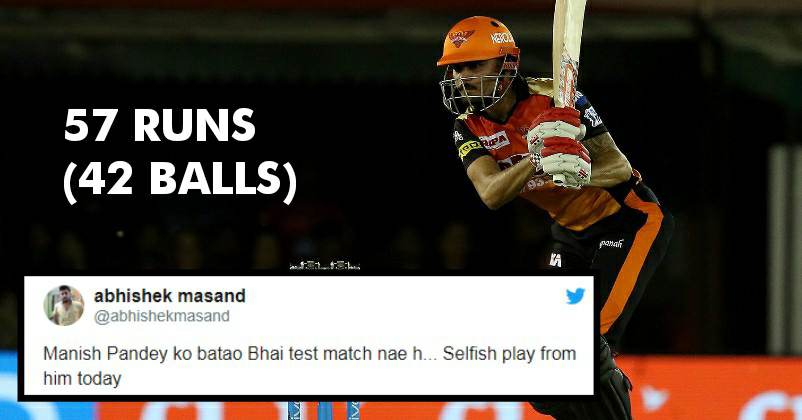 Today’s match was played between Kings XI Punjab and Sunrisers Hyderabad in Mohali. For the first time in IPL 2018, the captain opted for batting first after winning the toss. Yes, Ashwin won it and elected to bat first.

The total could have been chased easily, but Hyderabad lost the match by 15 runs. Everyone is blaming Manish Pandey for his selfish knock.

Manish scored highest runs i.e. 57 but he took 42 balls to do so. He played really slow which is why SRH lost the match. It didn’t look as if he was playing for making his team win.

Here’s how Twitter is trolling him left and right;

Miracles only happen if you try for them , Manish Pandey has played for his runs!

Reason for us to lose is Manish Pandey not having intent to hit big shots. I felt he was more inclined on ones and twos but should have taken few risks. May be Hooda staying there for few overs would have made a difference

Not with that pandey on the pitch. Hes not the kind of T20 player that wee needed.

Manish Pandey is all set to chase the remaining target on day 2!! #KXIPvSRH pic.twitter.com/PCNu27GVwP

What do you have to say about this? Wasn’t it a selfish knock?

KKR’s Brand New IPL Anthem Is Out. It Features SRK & We Are Loving It
After Chris Gayle’s 1st Century In IPL, Sehwag Trolled Haters Who Mocked Him & KXIP For Buying Him