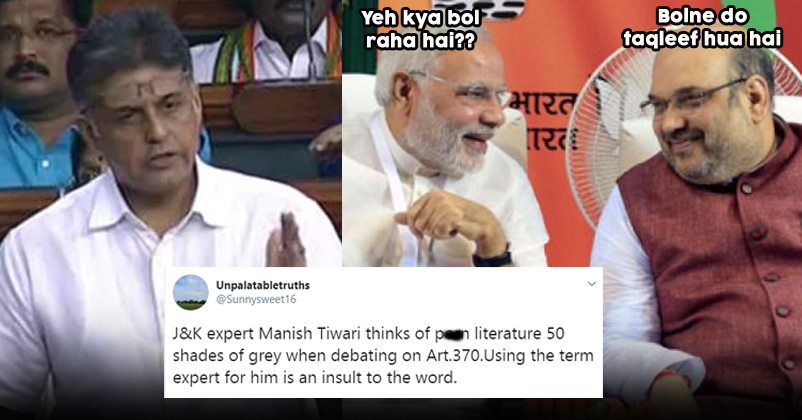 The Indian government led by Prime Minister Narendra Modi has taken a historic decision of scrapping Article 370 along with some other important decisions related to Jammu and Kashmir. Many political parties have supported the government in this matter but the oldest political party of India, i.e., Congress is not happy with this decision.

However, what surprises everyone is the fact that Congress leaders are not even well-prepared to give a speech in the ongoing discussion on the matter of abrogation of Article 370. Congress leader Manish Tewari is getting slammed on social media networks because of a statement that he made in the Parliament. 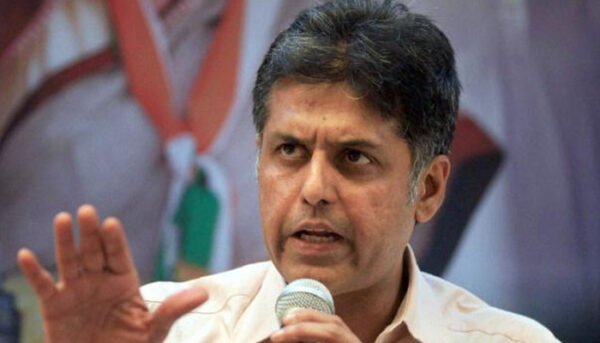 It loosely translates to, “There is an English book; not everything is black and white… There are Fifty Shades of Grey in Between”.

This statement was given by Manish Tewari when the home minister Amit Shah asked him to clarify his party’s stand on Article 370.

Twitter mercilessly trolled or rather slammed the Congress party and Manish Tewari for this statement. Here are some of the selected reactions:

Manish Tiwari, Congress says "Not every issue is black and white, there is a book that says 50 shades of grey." Hehe! He says this in reply to Home Minister over Article 370 revocation. (google 50 shades of grey pleej)

This must be the highlight of this parliament session…

Hope he sends him a copy to read too…

Right now in Lok Sabha:@AmitShah: “Congress should clarify if they are for or against scrapping #Article370.”@ManishTewari: “There’s an English book, it’s not black and white, it’s 50 Shades Of Grey.”

Remember those kids in school who tried to use words they didn't know the meaning of just because they thought it sounded cool? One of them grew up to be Manish Tiwari.

As Manish Tewari says "Not every issue is black and white, there is a book that says 50 shades of grey.

As soon as Manish Tiwari mention 50 Shades of Grey, the whole country now on google. pic.twitter.com/wslZdmeIuE

Is this the '50 Shades of Grey' that Congress's Manish Tewari was mentioning in Lok Sabha?#ShameOnCongress pic.twitter.com/Cq3ptBy0Ku

Manish Tewari thinks that 50 Shades Of Grey is a book about issues that are undefined or unclear. These are the same who think American Pie is a movie about food.

After this stupidity another Congress leader Manish Tewari refers to "50 shades of Grey" in reply to Home minister.
Why don't they understand that they are in parliament not congress HQ.
Thoooooo!!!👎 #ShameOnCongress https://t.co/WpRjLa1AoX

The book “Fifty Shades of Grey” is written by EL Jamesa and a movie has also been made on this book with the same name. It was directed by Sam Taylor-Johnson and the main leads were played by Dakota Johnson and Jamie Dornan.

Hater Says Sushma Swaraj Will Be Remembered Like Sheila Dikshit After De*th. See Sushma Ji’s Reply
This Superstar Is So Impressed With PM Modi That He Is Planning To Make A Biopic On Him