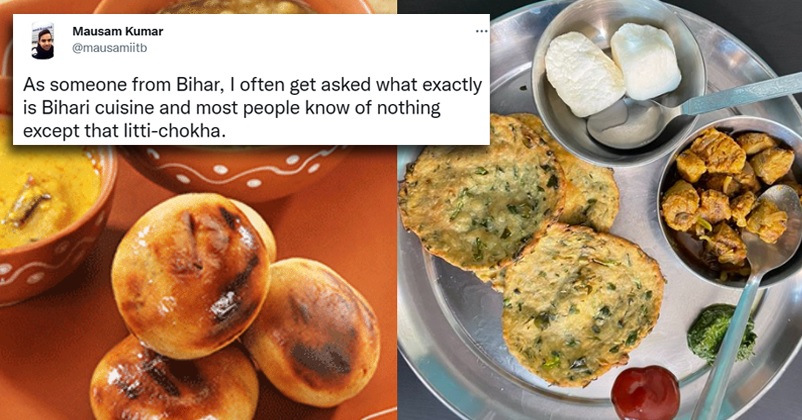 Bihar may be one of the backward states of the country but it is quite rich when it comes to cultural heritage, traditions, history and food. However whenever we talk about Bihari cuisine, we get to hear about only one dish – litti-chokha but the truth is that there is much more to Bihari cuisine than just litti-chokha. Though litti-chokha is one such dish which is cooked, eaten and loved all over Bihar but in reality, the different regions of the state have their own favourite dishes. Recently, a Twitter user from Bihar shared a thread about Bihari dishes and this will be very helpful in making people aware of Bihari cuisine. 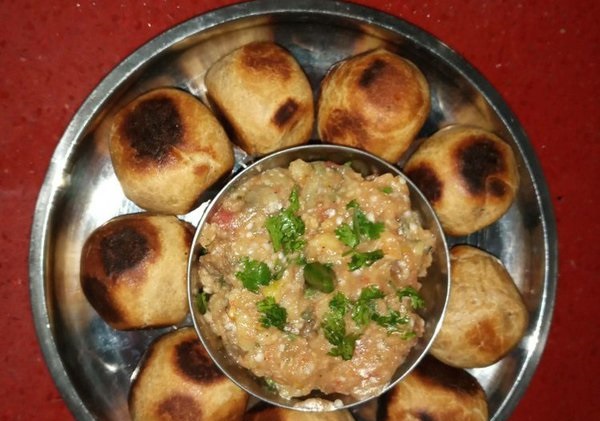 The name of the user is Mausam Kumar and he has started his thread with the tweet, “As someone from Bihar, I often get asked what exactly is Bihari cuisine and most people know of nothing except that litti-chokha. So, I am home for a couple of days and have decided to share some of our meals. I have been eating this since as far back as I can remember. A thread.”

As someone from Bihar, I often get asked what exactly is Bihari cuisine and most people know of nothing except that litti-chokha. So, I am home for a couple of days and have decided to share some of our meals. I have been eating this since as far back as I can remember. A thread.

After this, he posts the photo of sattu puri and ghugni which is made of chickpeas and he also talks about dhaniya chatni made by his mother.

This is what we had for brunch. This is sattu (gram flour) puri and ghugni (made of chickpeas). This is one of my favourite meals Maa makes. Most basic, but a meal I would recommend totally if you are in Bihar. No winter meal in my home is complete without Maa’s dhaniya chatni. pic.twitter.com/3FEUsmYPDk

The second pic features khichdi, chokha, achaar and papad, a yummy combo we can vouch for just by looking at the image:

Meal 2: Saturday lunch is always Khichdi, chokha, achaar, and papad. I have been having this same meal since I was a child. The Khichdi is very basic, with just the right amount of ghee. Can vouch for the taste. pic.twitter.com/DCwA0Deu5j

Meal 3: Last meal for the year. We are having the quintessential aaloo paratha with gajar ka halwa and the divine rasgulla. I am not exaggerating this is the best rasgulla you can ever have in your life. The guys we get it from have been making it for over 30 years. Always same! pic.twitter.com/XPznrJD50b

His first meal of the New Year was dhaniya puri and soyabean along with rasgullas:

Meal 4: First meal of the new year. For breakfast, there is Dhaniya (Spinach) puri with soya bean. These puris are hard to find anywhere else and is a typical Bihari staple. They go great with soya. Can’t have the first meal of the year without those rasgullas. pic.twitter.com/BAwkqmZaOG

His lunch of the New Year comprised of kadima, gobhi, peas, aloo bhujiya along with salad:

Meal 5: A sumptuous lunch for the new year. Lots of veggies in here. The one on the left has kadima, gobhi, and peas. The aaloo bhujiya is a necessary Bihari companion for any lunch. The dal is thin with a lot of cumin. Beet root, carrot, radish, onion, with spinach. Unbeatable! pic.twitter.com/m5Y0bTgW6L

The sixth photo was of a snack called bagiya:

The seventh pic is of mutton and roti and it is certainly a treat for our eyes, isn’t it?

Meal 7: Was invited for a small family bhoj (dinner) by Mausi. My Mausaji makes the most incredible mutton. I guess Roti and Mutton is as Bihari a dish as any. Our mutton has a lot of onion and khada masala with whole garlic bulbs. You all are invited, if ever you are around. pic.twitter.com/oKiOXkwOnt

In his last tweet, he shares that his mother has packed gujiyas and thekuas for him as he leaves for Delhi.

As I fly back to Delhi today to continue my meandering existence, I close this thread with a haul of Maa’s thekua and pirukiya (gujiya). If there is an essential Bihari snack, it has to be thekua. Maa makes the most delicious ghee wale thekua and pirukiya. If in Delhi, reach out! pic.twitter.com/cZf6UP9ekG

Wow, that was a yummy thread!