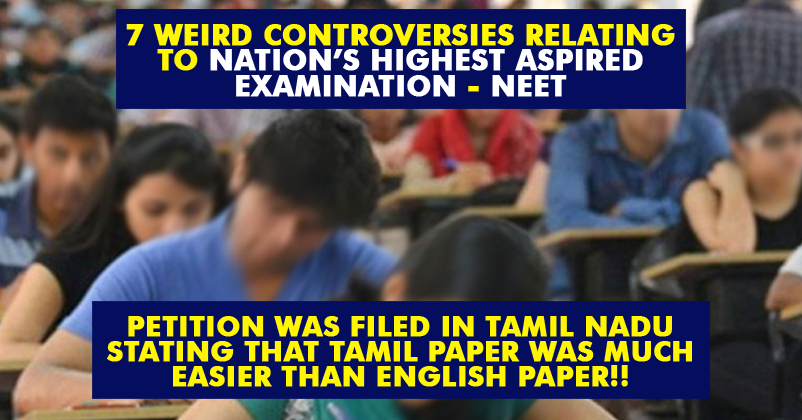 Every year NEET (earlier known as AIPMT) exam is conducted for the medical colleges. This year, multiple controversies followed the NEET Examination which was held on 7th May and was conducted by the Central Board of Secondary Education (CBSE). Several clashes between the board and medical aspirants were seen. In some cases, it was a state against the board. Following the events, it seems like no one is interested in the welfare of the students and are driven by their own propaganda. If you go through the list of events listed below, you will get an idea of the current scenario of the controversies.

Here is the list of events that have taken place till date.

On the same day, an 18-year-old girl in Kerala reported that she was forced to remove her bra and another student said that she had to change her jeans at the exam centre before she was allowed to sit in the examination hall. Several such incidents were reported from all over the country. 8th May 2017: The education minister of West Bengal claimed that the questions set in Bengali were tougher than those of English. Many students protested against it and demanded a re-exam.

Another report from Delhi stated that five persons belonging to a gang which included a government employee were arrested from Delhi and Jaipur for cheating medical aspirants. The gang members had promised students to provide them with NEET question papers.

Two youths from Bihar were arrested by the Goa police from two different examination halls in the state for faking their identity to appear for the examination.

17th May 2017: CBSE conducted re-test for 230 students as they didn’t receive the question paper in their desired language. Out of 230 students, 228 wrote in Telugu and 2 in Hindi.

24th May 2017: In response to a PLI (Public Interest Litigation), the court issued an interim order, Justice M V Muralidharan stayed the publication of the NEET results and directed officials of the Medical Council of India, the CBSE director and the Union health ministry to file their counter affidavits against the PIL.

The petitioners of the PIL alleged that uniform question papers were not distributed for different language in terms of difficulty level. They claimed that the Tamil set was easier than that of English.

Another group of parents compiled of 40 to 45 members filed a petition in the Gujarat High Court claiming that the paper in Gujarati was tougher than English.

25th May 2017: Supreme Court declined a petition that wanted the exam to be cancelled and re-conducted all over the country.

27th May 2017: Gujarat High Court issued a notice to CBSE, regarding the petition filed by the parents.

4th June 2017: Another fresh petition was filed in the Madras High Court seeking cancellation of the examination.

6th June 2017: CBSE replied to the petition regarding the Tamil paper to be easier than English. The board denied the allegations and stated that all the papers were uniform in terms of difficulty.

In response to the notice sent by the Gujarat High Court, they said that they distributed different papers as they were concerned that the regional papers might get leaked. But the Court was not satisfied with the answer and stated that the papers in English could also get leaked.

These are the events that have taken place since the date of the examination. We will keep on updating this list.

Do let us know what your thoughts are in the comments section below.

Man Was Taking Drugs In Public Toilet. When Caretaker Stopped Him, He Killed Her 21-Yr Son
Gurugram Gang-Rape Case: Two Rapists Are Arrested & One Is Missing