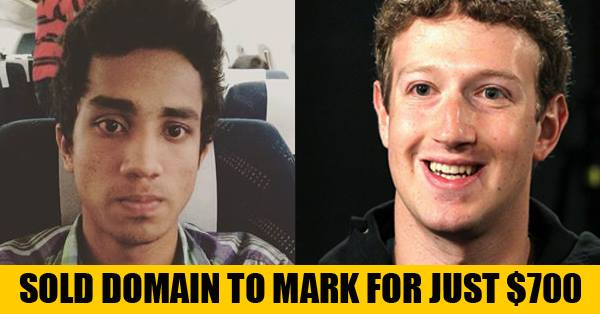 Facebook recently purchased a domain name from an Indian boy from Kochi; however the deal has been done at a very low price as Facebook may have paid much bigger amount for this domain.

Amal Augustine, who is in the final year of electronics engineering made a smart move by buying the domain “maxchanzuckerberg.org” last December. This is the short form of Facebook CEO’s Mark Zuckerberg’s daughter’s name which is Maxime Chan Zuckerberg. The domain was sold for a meager amount of $700, but Amal is more excited with the fact that he has been contacted by Facebook. In his words, “I have registered quite a few domain names and I have been doing it for some time. I registered this domain name when their baby was born last December.”

However, Amal was approached through GoDaddy, which is an Internet domain registrar and web hosting company enquiring about his will to sell the domain and for what amount. He replied in positive, quoting an amount of $700. But when he sent an email to close the deal, he was surprised to see that it was from FB. The email was from Sara Chapel, manager of Iconic Capital, the same firm which takes care of the financial deals of Mark Zuckerberg.

Amal said, “When the letter came officially mentioning the change of registration, I noticed the FB letterhead. But since it’s not legal to negotiate, I just went ahead and closed the deal in seven days.” What Amal did is called cybersquatting, a process in which a domain of a trademark which belongs to someone else or organization is bought and later it is sold to the same person or organization at a higher rate. This has been done earlier also by many domain buyers as famous personalities or organizations will definitely not like that someone else possesses the domain of their name.

Mahesh C, faculty in the department of computer science and engineering, FISAT stated, “Internet squatting is not an illegal process. People register domains of popular names, brands or organisations and later bargain with the owners and eventually sell it back to make money.”

Prashant Mali, cyber law expert advocate also gave his views, “Cybersquatting is quite common. Domains such as amithabbachan.com and salmankhan.com were ‘squatted’ by techies in the past, It is not considered a violation as per the Indian cyber law, but it’s a civil rights violation and action can only be taken as per World Intellectual Property Organization (WIPO) arbitration rules (2014).”

OMG! This Car Made By An INDIAN Mechanic RUNS ON WATER!! Unbelievable…..
It’s Time For Shilpa Shinde To Give It Back! Files FIR Against Benaifer Kohli And CINTAA!