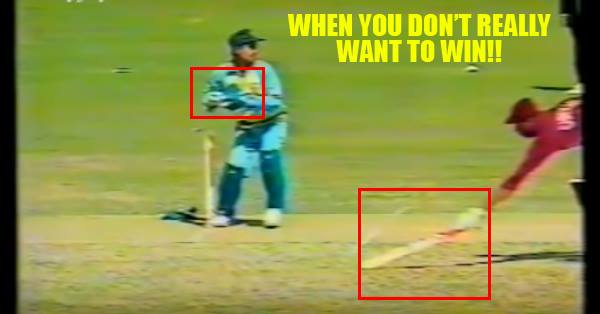 India was hosting Wills World Series and it was the fourth ODI of the series. India was to play with West Indies on October 30th, 1994. India was yet to be defeated in the tournament. But who knew the match would go out of India’s grip in the most bizarre way possible.

India’s the then captain Mohammad Azharuddin won the toss and elected to field on a seaming track. West Indies batting first scored 257 in 50 overs with the help of India’s average bowling and poor fielding efforts on the field. The biggest controversial and baffling moment in India’s bowling was when Mongia had a chance to run not Anderson Cummins. But instead he gathered the ball and threw it to the other end rather than running Anderson Cummins out.

Now it was India’s turn to bat and chase down 257. The total seemed to be less competitive in front of India with Sachin Tendulkar, Ajay Jadeja, Navjot Sidhu, Vinod Kambli and Azhar in the team and considered one of the strongest batting line-ups in the world.

In the same regards India got off to a great start with Tendulkar hitting boundaries off of Cameron Cuffy. But later was dismissed by Cummins. India lost a couple of wickets in quick succession in the name of Tendulkar and Sidhu. Things went wrong when Ajay Jadeja was run-out with a direct hit from Keith Arthurton in the 41st over at a total of 195.

India now needed 63 off 54 balls which seemed to be a get-able total even in 90s. But the next four overs fetched just five runs. Prabhakar scored his 2nd ODI hundred in 154 balls with painstaking effort which went in vain as India lost to West Indies by 46 runs. To be mentioned, Nayan Mongia added just 4 runs in the 21 balls he faced. The Controversy Of Match-Fixing By Manoj Prabhakar and Nayan Mongia

Because of their disappointing and poor performance, Prabhakar and Mongia were banned for the rest of the tournament and were replaced by Chetan Sharma and Vijay Yadav.

Later, Manoj Prabhakar made an allegation in an interview given to The Outlook published on June 11, 1997. He said, “In Kanpur, when we were chasing the West Indies score, [Nayan] Mongia came in to bat and conveyed the management’s instruction to try and get as close to the target. The resultant hullabaloo about my going slow would be directed at the team management and not me as I was doing so under their instructions. Of the 48 balls in that period, I played just 11. I scored nine off those 11 balls. In fact, due to someone else’s fault, I was dropped and humiliated.”

Justice Chandrachud completed his inquiry in October 1997 and in the report he favoured Mohammad Azharuddin, He stated, “I find it very difficult to accept any of the aforesaid statements made by Manoj Prabhakar. First and foremost, there appears to be no plausible reason why he slept over such important episodes, for six years in one case and for three years in the other.”


You can also watch the video directly on YouTube by clicking here.

After the commission’s report, Azhar was declared innocent at the moment. The commission was criticized in Indian media and allegations were made that it did not examine every fact made available to them.

It’s a shame that a game which is considered almost a religion in India had such bad incidents which made its fans take a back. Do not forget to share your thoughts in the comments section below.
Source

Continue Reading
You may also like...
Related Topics:A Match Where Manoj Prabhakar and Nayan Mongia Played Villian For India