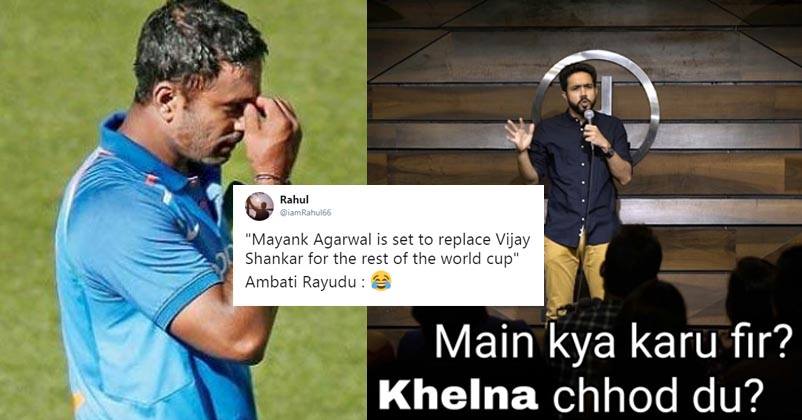 India suffered its first loss against England recently and it has not bought our spirits down. India is still acing it in the World Cup 2019. Besides this loss, India also suffered a major loss for the team when their all-rounder Vijay Shankar had to drop the World Cup midway due to injury.

Vijay Shankar is now to be replaced by Mayank Agarwal, who has not yet played a single ODI. Recently Ambati Rayudu took a sly dig at the India chief selector after he termed Shankar as a 3-dimensional player. He tweeted that he might need 3-D glasses to watch all the matches now.

People came up with theories, that maybe this tweet cost him his place in the Indian team. They trolled him a lot and some were really funny. Here is what netizens had to say.

BCCI picked Vijay Shankar in place of Ambati Rayudu saying it was a tough choice. Now that Shankar is injured they replaced him with Mayank Agarwal. Is BCCI trolling Rayudu for that 3D comment? 🤔🤪 #CWC19

Jasprit Bumrah dismissing all the batsmen that threaten India's chances of winning the World cup. #Shankar

How I will sleep tonight knowing Vijay Shankar is out of team #CWC19 pic.twitter.com/9FQvcHCk8B

Coach : how about ambati rayudu ?

I feel that he would have been selected if he had not tweeted that sweet sarcastic message.

Jonny Bairstow, Kuldeep Yadav’s Collision On The Ground Is The New Meme Taking Over
Remember Shashi Tharoor’s Lady Friend From The Match?