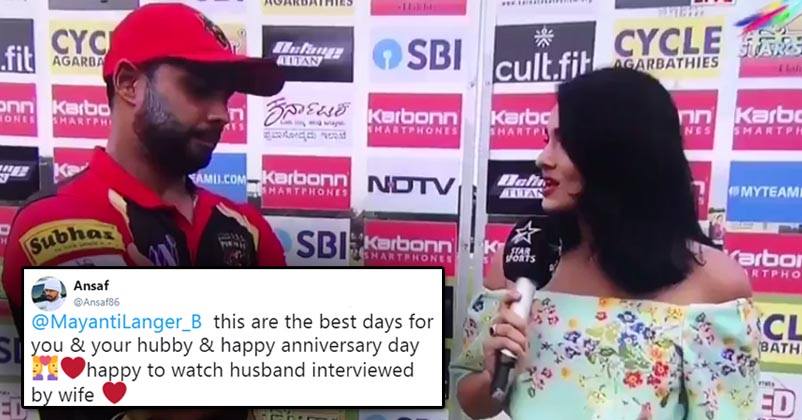 Mayanti Langer is one of the most beautiful and charismatic anchors of the sports industry and on Friday, something happened which she may not have even expected.

Thanks to a match of Karnataka Premier League, which was played on Friday in Mysore, Mayanti got the chance to interview her husband Stuart Binny and that too, on their fifth marriage anniversary. 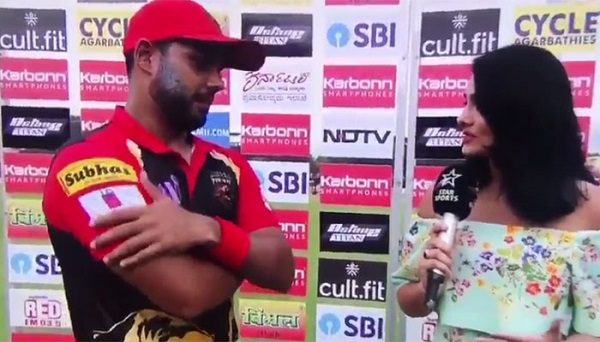 Stuart (33) played for Belagavi Panthers and helped his team win the match against Bengaluru Blasters as he scored 87 runs of just 46 balls and also took two wickets. Stuart Binny got the man of the match award for his all-round performance.

However, Stuart must have been surprised after seeing his wife Mayanti doing the post-match interview and she asked some really good questions.

Perfect Gift from Binny to Mayanti :

Binny scored 87(46) after getting dropped like 3-4 times then picked 2/37 too. And Mayanti said its their 5th anniversary. A perfect gift.

Mayanti Langer interviews her husband Stuart Binny after his blistering knock of 87(46) and it was their 5th wedding anniversary too👌👌 pic.twitter.com/33kvvu4T1f

What a lovely message:

True love is spending 1 day getting married, And rest of your life feeling glad you did. #HappyAnniversary👏 👫 @MayantiLanger_B

Even Mayanti Langer replied by tweeting, “What a sweet message…thank you!”

Mayanti had interviewed Stuart earlier also but after marriage, this is the first time that she got to interview him on camera. Stuart had a brief International career in which he played 6 Test Matches, 14 One Day Internationals and 3 T20 matches. His father is a former Indian cricket player who has also worked as a national selector.