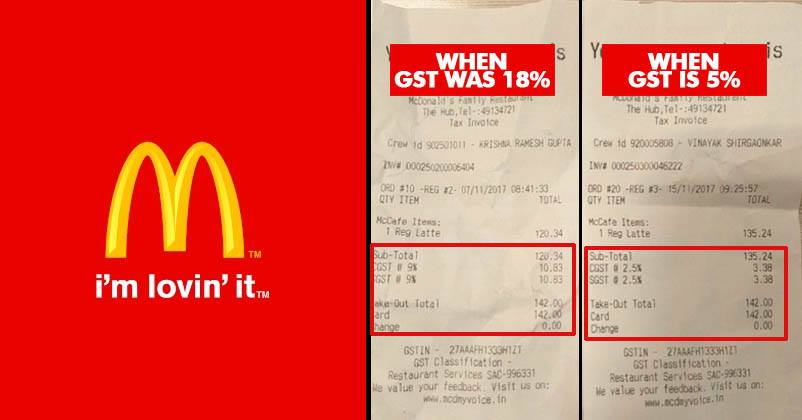 The Modi government was criticised a lot after the bills of restaurants increased due to GST and the people who loved to eat out were experiencing dent in their pockets. 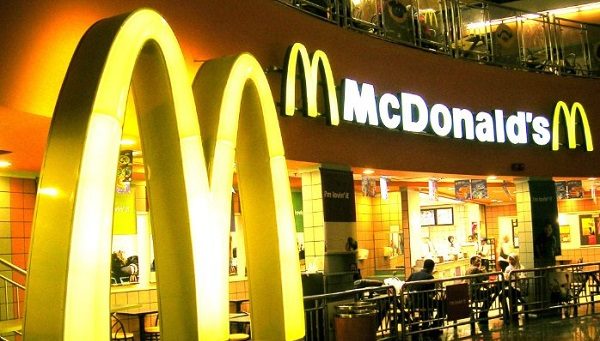 But now these restaurants won’t be able to enjoy the benefit of input tax credit which helped them in settling off the tax paid on inputs with the final tax. This slash in rates was the biggest move taken by the government since the implementation of GST. Moreover, tax rates for 200 items have also been reduced by the government.

Yesterday, after the new rates came into effect, people were thinking that now their restaurant bills would reduce as the companies had announced that the rate cut will be passed on the customers. However, nothing of this sort happened and the bills remained the same even after the reduction in tax rate. 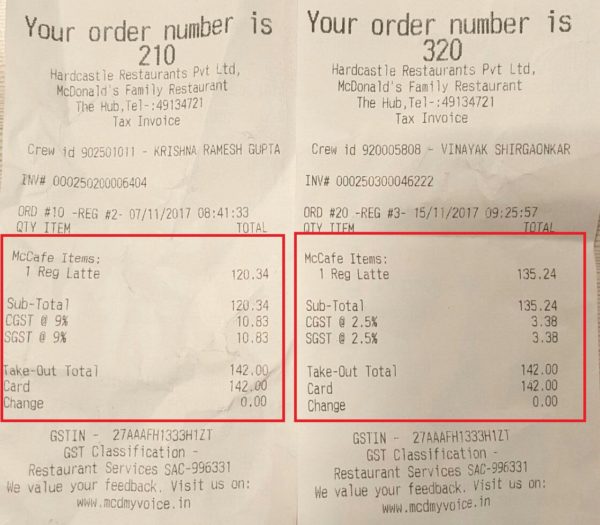 The aggravated diners took to Twitter to slam fast food chains like Starbucks and McDonalds for increasing the price of items after the rate cut in order the keep the final bill at the same amount as it used to be earlier. They also uploaded the photos of bills before rate cut and after rate cut and tagged the Finance ministry, demanding strict action against these outlets.

Shame on you @mcdonaldsindia Not passing on GST benefit to customers should be a crime @FinMinIndia Please take action! pic.twitter.com/P9J4gWNxfX

When 18% was introduced it was straight away transferred to the consumers but when reduced they adjusted. Cool!!!
They think of doing such malpractice in India because they know nothing happens here.

@narendramodi Respected PM sir, GST is been made useless by restaurants. First with 12%-18% with ITC n now with 5% without ITC. V need some action on this sector for non compliance.

See it's simple from now that if these kind of frauds are happening than we should avoid these kind of restaurants….Cause unless and until sales comes down they will not understand this….And than only they will learn GST properly….

I already stopped going McD , since very long…
But after this greedy approach now onward will try to convince my nears and dear ones NOT to go McD..
Really pathetic explanation..
👿👿👿

Why is there no action?

Also many restaurants are still adding service charges and it’s going unnoticed. Why is there no action.??

When McDonald’s saw that the customers are getting angry, it tried to calm them down by saying that the operating costs have gone up despite the cut in GST rates. McDonald’s stated that it used to get input tax benefit on various expenses such as rent, food and other things but as this facility is not available, the costs have increased. The outlet further said that it has revised the bill structure in such a manner that the final bill remains the same as it was before the reduction in GST rates.

McDonald’s India took to the micro-blogging site and wrote this in a series of tweets,

“The Government has brought down GST from 18% to 5%, but there has been a removal of Input Tax Credit. Due to this, our operating costs have gone up. However, keeping customer convenience in mind, we have structured the changes in such a manner that total amount paid by the customer remains the same.”

The Government has brought down GST from 18% to 5%, but there has been a removal of Input Tax Credit.[1/3]

Due to this, our operating costs have gone up. However, keeping customer convenience in mind [2/3]

we have structured the changes in such a manner that total amount paid by the customer remains the same. [3/3]

McDonald’s gave a statement to NDTV,

“We believe in giving the best value to our customers, and have passed on the benefits wherever we could. We have substantially reduced the prices of some of our flagship products.”

There is no doubt that the customers must be feeling cheated now and restaurants should answer each and every question to come clear on this matter.

Chinese Guy Proposes His Girlfriend For Marriage With 25 iPhone Xs. Love Is Blind And Expensive
WhatsApp Messages Can Be Accessed Even After Deleting. Here’s How To Do It With A Simple Method