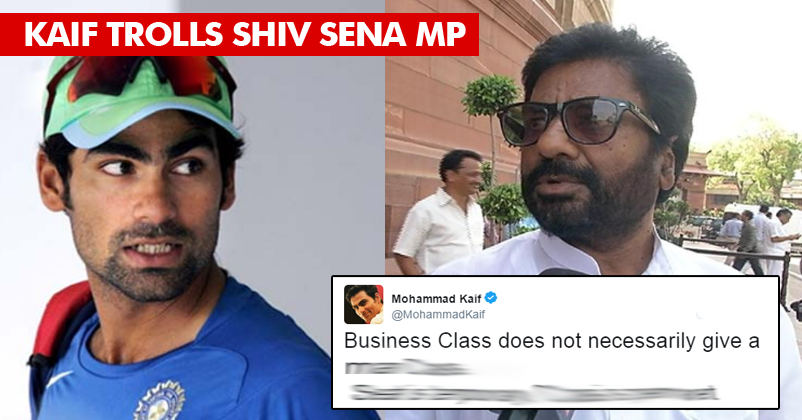 Shiv Sena MP Ravindra Gaikwad is getting slammed heavily for the horrific act that he committed in the Pune-New Delhi Air India flight but he doesn’t feel apologetic at all.

On Thursday, the Shiv Sena MP hit a 60 years old Air India staffer with his sandal 25 times and all this happened because the politician’s seat was changed to economy class from business class by the airlines and he was very unhappy about it. Mohammad Kaif, the Indian cricketer, took a jibe at Ravindra Gaikwad on the micro-blogging site, Twitter over this incident. He tweeted, “Business Class does not necessarily give a man Class. Seat is temporary, Class is permanent. #KaifSyrup”

Business Class does not necessarily give a man Class.
Seat is temporary, Class is permanent.#KaifSyrup

When the MP was asked whether he would apologize or not, he said, “First ask him (victim) to apologize, then we will see. A 60-year-old man should also know how to behave.”

Air India has filed two separate FIRs against the MP and also banned him from flying in any of its flights in future. Following the course of Air India, Indigo has also taken the step of cancelling Gaikwad’s ticket of Delhi-Pune flight which was scheduled to depart at 4:00 PM on Friday. In fact, all the Indian airliners have taken the decision of banning the MP from flying in their flights.

Will the MP apologize or not? What do you think? Share your views in the comments section below.

Shirish Kunder Called Yogi Adityanath A “Goon”! Twitterati Trolled Him Harshly & Made Him Delete His Tweet!
Anti Romeo Squad Is Harassing Innocent Boys Too! Good Or Bad ? Let’s Just Discuss About It.