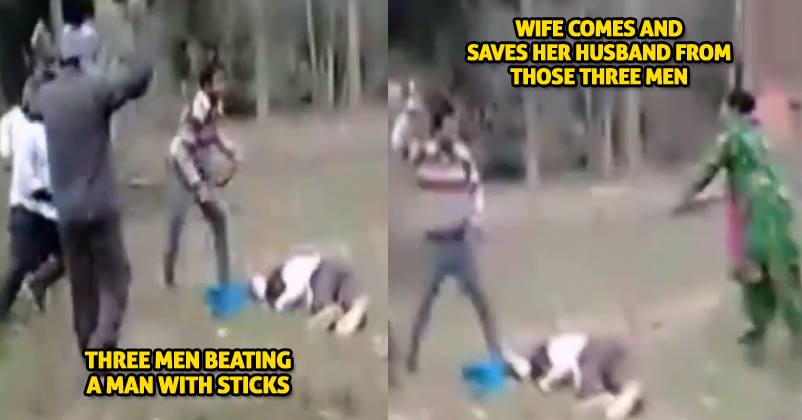 Sometimes, a woman is enough to fight all odds and stay strong. We just came across a video in which a woman from Haryana is fighting like a tigress with her husband’s attackers.

The video went viral on the internet & we were surprised to see the way she fought so bravely.

In this clip, few attackers started beating her husband and this is when she went forward with a stick and protected him like a tough guard.

This incident happened in Yamunangar in Haryana; in the video, we can see how her husband is lying unconscious on the ground and how she’s leaving no stone unturned to protect him.

Like a sherni, the woman swings the stick & also blocks the blow coming in from another attacker.

This way, the woman handled multiple sticks and attacks. She did so till the time the attackers backed off. In the same video, we can see another man, who’s just standing and enjoying the drama.

#WATCH: Woman saves her husband who was being beaten up by a group of men in #Haryana's Yamuna Nagar. pic.twitter.com/V9PpR0SWac

People are praising her for her courage…

Brave women👍
Immediate action should be taken against the criminals

Courage of woman with men standing and filming. But where is law order in this nation. Shame. Seems like punjabi spoken by her.

Very good salute to this lady …

No words for this #braveheart #woman 💪👏🙏🙌

Arbaaz Khan Revealed Something Important About Dabangg 3. Fans Will Be Excited To Know It
PM Modi Welcomed Hadrien, Trudeau’s Youngest Kid, & His Reaction Will Make You Go Aww