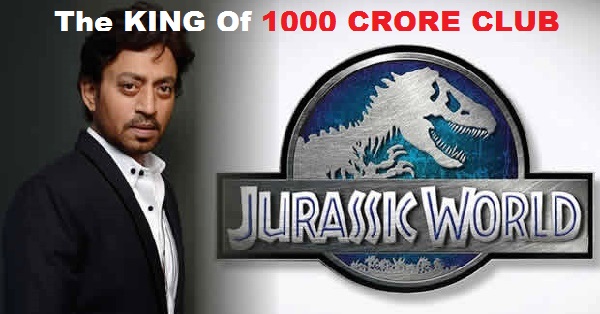 Irrfan Khan, the versatile Bollywood actor is having a great time, as his Hindi movie “Piku” proved to be a great success. Besides, he has left an unforgettable impression of his acting with a number of good movies like The Lunchbox. And now the Hollywood movie Jurassic World has brought him to a level where no other Indian actor has reached yet.

Many times, we talk about the movies crossing the club of 100 crores and we measure the actor’s status with his movie’s earning. Well, keeping this fact in mind, it becomes necessary to mention here that Irrfan Khan’s Jurassic World has grossed Rs. 6300 crores at Box Office Worldwide which is way higher than the income figures of any other Indian actor’s movie. To talk about the lead characters of the movie, they are Bryce Dallas Howard, Irrfan Khan and Chris Patt.

Irrfan has captivated everyone’s heart with his charming acting blended with remarkable facial expressions. And for the same, we can witness that his popularity is constantly on rise. Very soon, he will be seen with Tom Hanks and Felicity Jones in the upcoming Hollywood Movie “Inferno”.

We wish this brilliant actor good luck and lots of success for all his upcoming movies!

What is your opinion about Irrfan Khan? Isn’t he one of the greatest actors of the Bollywood industry as far as flawless acting combined with perfect expressions and excellent dialog delivery are concerned? Share your views in the comments section below!