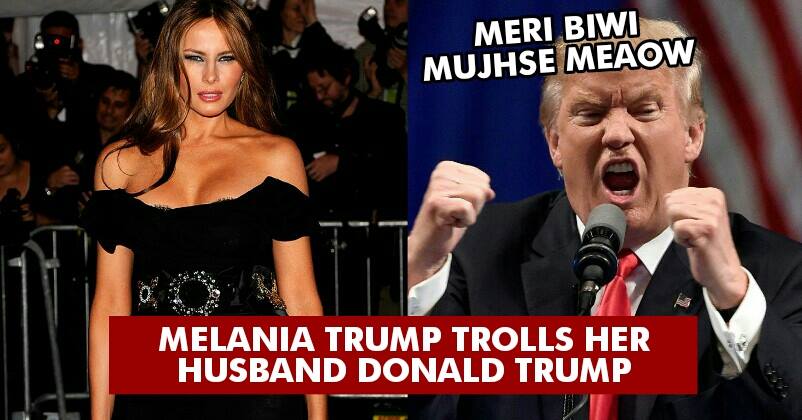 Ever since Donald Trump has been elected as the US President, there is a strong force of opposition against him. On all social media sites, especially Twitter people are often seen trolling him.

Even some really famous Hollywood stars like Meryl Streep, Robert Downey Jr & Jimmy Kimmel made fun of the US President publicly.

Just recently a GIF went viral on social media which was originally posted by blogger Andy Ostroy. In the GIF, Melania Trump is seen at an inauguration smiling for a brief moment and then frowning as Donald looks towards her. Checkout –

Seems the only #Wall @realDonaldTrump's built is the one between him and @FLOTUS #Melania #trump pic.twitter.com/XiNd2jiLUF Even the blogger suspected the authenticity of the activity and tweeted again:-

I suspect this isn't a real account for @flotus… pic.twitter.com/ziWXhlHruV

Another user replied to him with proof that it indeed is original and verified account of Melania Trump:- After some time the like disappeared but the task was done.The news spread like the wild fire on Twitter and people started trolling both Donald & Melania on the basis of snapshots.

@MELANIATRUMP the beauty/horror of a screenshot is that it lasts forever. pic.twitter.com/8PfHCVbVPq

.@MELANIATRUMP as soon as she sees what she's just liked. pic.twitter.com/8CFB5qUPwW

She is signalling for help. Trapped in the tower. It's going to make a great book.

For the information, Melania has two Twitter accounts @FLOTUS & @MelaniaTrump. The activity came from the latter where the last activity was on Election Day i.e Nov 8.

There could be many reasons for the blunder. It could have been an honest mistake or the account got compromised. It is also possible that the tweet got accidentally liked by her.