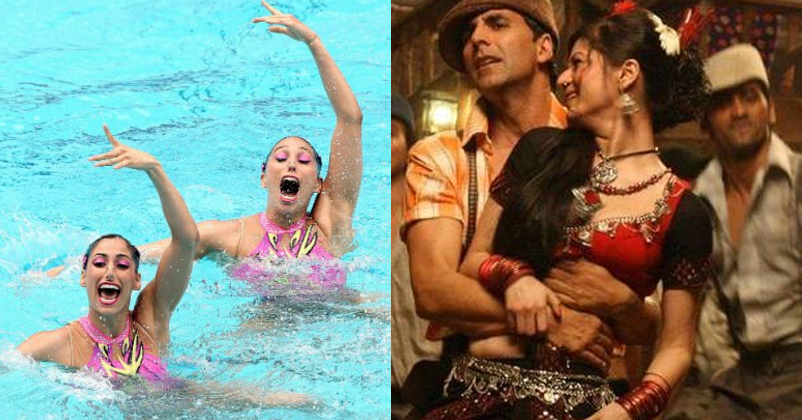 Time and again I have said this a lot of times that Olympics is not about winning medals, it’s about the stories of people participating in it. Their journey of beating the odds and sparkling like a bright star. Olympics is about uniting nations having different diversities and cultures and binding them together under the umbrella of Peace and Harmony.

Although India still hasn’t opened its account yet into the medal table tally, but we are enjoying a nice time in Rio Olympics 2016. From Dipa Karmakar’s successful ‘Vault Of Death’ to Vikas Krishnan perfect punches, they have all won our hearts. However, our Indian Swimmers in Rio Olympics are unfortunately not having a successful campaign but there is a news from the game of swimming that will cheer us up. Two Mexican swimmer were participating in Synchronized Swimming competition in Rio Olympics 2016. First of all, I didn’t know that such of competition even existed. Secondly, it is very exciting as an Indian to watch them perform on the hit song ‘Aila Re Aila’ from Akshay Kumar’s movie ‘Khatta Meetha’.

Watch The Video and Enjoy

And This Is How They Do It. AMAZING SYNCHRONIZATION#Olympics Swimmers Perform #Rio2016 @akshaykumar #BollywoodSong pic.twitter.com/EsjVR29i90

Although it is the Salman Khan who is the Rio Goodwill ambassador, but in actual, Akshay Kumar is setting up the groove. We have always debated on the world wide popularity of the 3 Khans, but now, there is a new Khiladi in the town who is ready to take on the 3 Khans.

The way these two swimmers have synchronized with each others move and along with the song is just simply amazing. Hats off to their awesome performance. Also with their splendid performance on this song, the duo ended up at the ninth place and have also been qualified for the finals.

Well, there is no doubt that Bollywood songs are very catchy to ears which makes the whole world listen to them. The beats and rhythms make the people tap their feets and eventually make them dance. And people all over the world dancing on Bollywood songs are not rare sights, Youtube has completely opened a new dimension for us to look at the world from a different perspective. It’s a global city, where people gossip with just a click of a button.

What are your opinion about this amazing dance performance ? Write it down in the comment section below ! !

Not 1 Not 2 But SOOOO MANY Mistakes In Rustom’s Uniform! We Bet None Of You Noticed!
Divyanka & Mouni Are Shaking Their Booties & It Is Too Hot To Handle! Watch Video