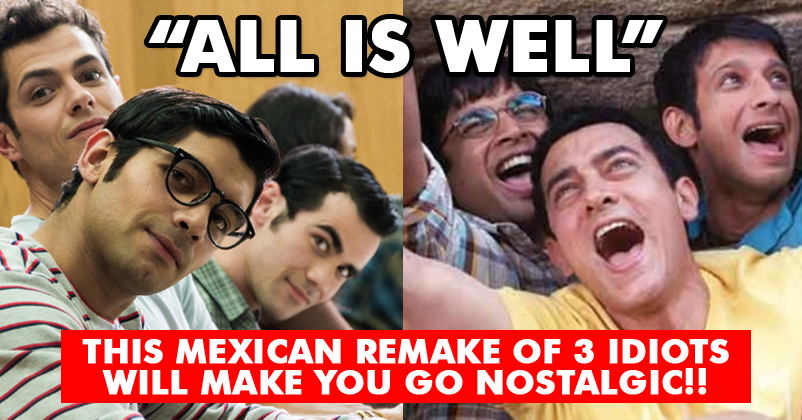 It’s been more than 7 years that 3 Idiots released in India and took the Box Office by storm. The film not just became the 1st 200 crores grosser of India but also got the respect of being Bollywood’s one of the best films ever. 3 Idiots was one of those very rare films that broke the generation barrier and was loved by all age groups. If we remind, 7 years look too long a time, because the film is still very much in our memories and it seems it just released recently. Who can forget Rancho, Chatur, Virus or even “Farhanitrate” and “Prerajulisation”? I bet everyone sticks to the TV whenever this film premiers on any channel. We all laugh like mad on Chatur’s speech.

It is clear that 3 Idiots is not just popular in India, and so Mexico has remade the film for their audience. Trailer of the Mexican Remake of 3 Idiots was out recently on YouTube and we are getting all the feels after watching it.

Have a look at the ‘3 Idiotas’ trailer

Here is what people on Twitter are talking about 3 Idiotas

I am happy to see other countries making remakes of #Bollywood movies. Just saw that there is a maxican remake of #3idiots called #3Idiotas

It is just me or does this look better than #3Idiots and #Nanban? #3Idiotashttps://t.co/YxD9QgErAt via @YouTube

Did they just make a whimsical version of @chetan_bhagat 's 3 Idiots in Spanish #3Idiots https://t.co/qvgWnkwDhh

The Trailer Of The Mexican Remake Of #3Idiots Looks Like An Exact Replica Of The Original https://t.co/EuItrsFIyR @aamir_khan

Did you like the trailer? Didn’t it remind you of some iconic scenes of the film like “The Wedding Scene”, “The Scooter Scene”, “The Pee Scene” and many more? We loved it and appreciate the efforts of Alfonso Dosal, Christian Vazquez and German Valdez who play the roles of Aamir Khan, R Madhavan and Sharman Joshi respectively.

Tell us about your thoughts in the comment section.

Continue Reading
You may also like...
Related Topics:3 Idiotas, 3 idiots

Guy Tweeted “Shaan Is Jealous Of Sonu”! Shaan’s Awesome Reply Made Him Delete His Tweet!
After Bahubali Part 1 & 2, Makers Are Ready For Bahubali 3! Here’s What SS Rajamouli Said