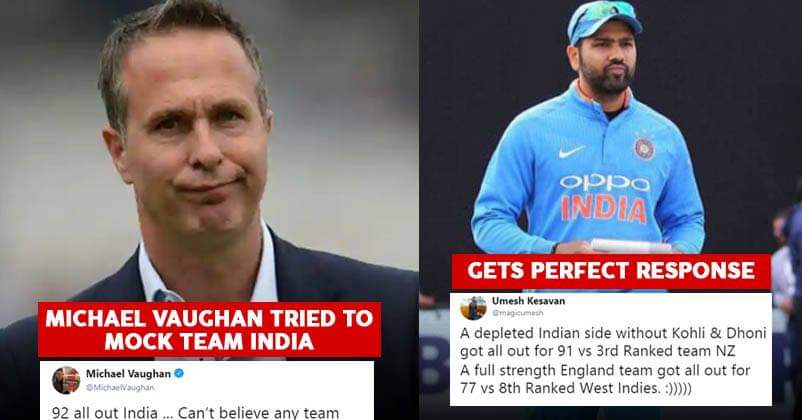 Since the Indian cricket team after giving spectacular performances against the kiwis, succumbed to a dreadful match today, where they were all out under 92, criticisms poured in.

But, former English cricketer Michael Vaughan tweeted that it is unbelievable how the Indian team performed so poorly in the ongoing ODI.

He took to twitter to share how surprised he is with this kind of match result. He tweeted how all Indian players were bowled out just for 92.

Here is the tweet by Michael Vaughan. Check it out.

Netizens trolled him like never before, check some of the comments.

Atleast we won something what did you win without Smith warner? Even lost tri series with pak and zimbabwe 😂😂😉

What did australia do in Champions Trophy 2017? They had smith warner and a full strength bowling attack? Michael Clarke himself on record has said that Aussies slumped from No. 1 to No. 5 in tests when smith and warner were in the XI!

Ohh!!! Recently a team (inventors of cricket) bowled out for 77…That too in tests…Can't believe!!!

So, what is your reaction to this tweet by Michael Vaughan?

Prithvi Shaw Got Inspired From Ranveer’s “Apna Time Aayega” After Injury. This Is What He Posted
Rafael Nadal Gets Engaged To Girlfriend Xisca Perello, You Can’t Miss Her Gorgeous Pictures.