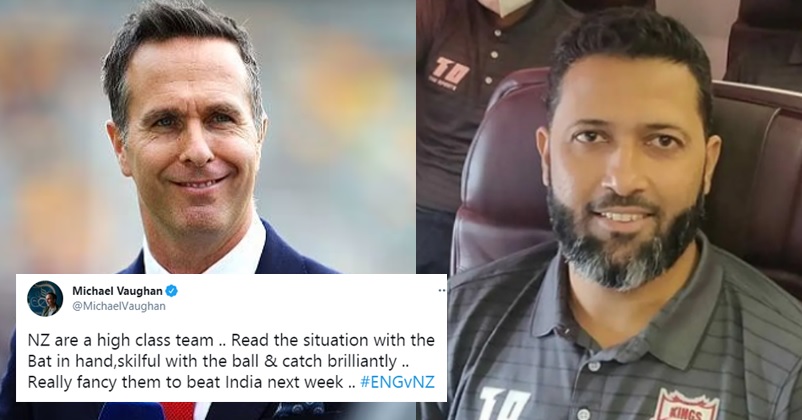 The top two teams of the cricket world, India and New Zealand will soon face each other in the finals of the World Test Championship which will be played at Southampton beginning from June 18. The former cricketers and cricket analysts are giving their opinion as to which team has more chances of winning the finals and majority of them feel that New Zealand has a better probability of winning as it has already played two test matches against England and has won the series by 1-0 which implies the fact that NZ has a good idea of the English conditions.

The former England cricketer Michael Vaughan is known for speaking against the Indian cricket team and recently he has made a tweet in which he says that New Zealand is a high class team. He also hopes to see India getting defeated by the Kiwis in the finals of the WTC.

Michael Vaughan’s tweet read, “NZ are a high class team.. Read the situation with the Bat in hand, skilful with the ball & catch brilliantly.. Really fancy them to beat India next week.. #ENGvNZ”

NZ are a high class team .. Read the situation with the Bat in hand,skilful with the ball & catch brilliantly .. Really fancy them to beat India next week .. #ENGvNZ

The tweet was soon noticed by the former Indian cricketer Wasim Jaffer who had already trolled Vaughan many times in the past and he didn’t miss the opportunity this time as well. Wasim Jaffer is known for posting funny memes and he mocks the former England skipper by posting a famous meme from the Bollywood movie “Welcome”.

The tagline of the meme is, “Tera kaam ho gaya tu ja (Your work got finished, you can go now)” and Jaffer has shared it with the caption, “#WTCFinals”

As far as the two match test series between England and New Zealand is concerned, the first test match was drawn because of rain and the Kiwis won the second test match as well as the series. In the second test match, England batted first after winning the toss and posted a decent total of 303 on the score board. In reply, the New Zealand team made 388 runs in their first innings and took the important lead of 85 runs but the second innings of the England team was no less than a nightmare for the hosts as they managed only 122 runs. The Kiwis achieved the target of 38 runs after losing 2 wickets and won the test match. While Matt Henry of New Zealand was adjudged as the player of the match for his superb bowling performance, the England cricketer Rory Joseph Burns was given the player of the series award.

Will the Indian team be able to win the WTC finals? What do you think? Let us know your opinion.

Sehwag Reacts To Shakib Al Hasan Kicking Stumps In Anger During DPL In His Own Style
“Where Are Your Dance Moves Now?,” Shubman Gill Reveals Funny Banters With Pat Cummins