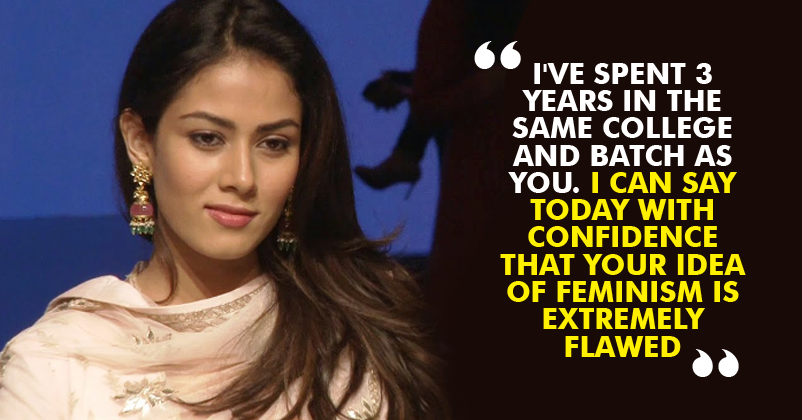 The International Women’s Day didn’t go well for actor Shahid Kapoor’s wife, Mira Rajput, and at present, she is at the center of controversy, getting slammed for her statements.

Yes, that’s right! Working mothers and feminists are condemning Mira for the remarks she has made with regard to motherhood and destructive feminism. She is getting lashed at social media networks and people are writing open letters to her. Recently, her former classmate (name not revealed) has written an open letter as a Facebook post. Having watched your interview, I feel extremely enraged today. I’ve spent three years in the same college and batch as you. I can say today with confidence that your idea of feminism is extremely flawed. Seeing you walk around with your posse in college, belittling women who were not skinny enough or did not subscribe to your fashion ‘standards’ makes me wonder what you ever did to have a moral high ground over anyone at any point. Your narrow world view is astounding to say the least. And not to forget, how your statement about working mothers takes us years back in reaching actual empowerment of which you seem to know nothing.

With lots of aggression,

If you don’t know as to why Mira is facing the flak, let us tell you that on the Women’s Day, Mira talked about her tough pregnancy, how she was body-shamed and how much she loved being a homemaker. But she has landed in a soup by stating that she can’t be a parent who goes for work, leaving her kid alone and spends just an hour with her. She has further added “Misha isn’t a puppy.” In her words,

“I had a tough pregnancy, I went to those 5 months of difficult times to bring my daughter into this world. So now I want to spend every moment that I can with her and I think there is a set of responsibilities around my plate and I feel at my age I have a lot more energy, I have my future ahead of me, so I can finish all of my responsibility and I have nothing in my way. I can raise my daughter, I can be a good wife. Nothing will stop me after that. I love being at home, I love being a mother to my child, I wouldn’t want to spend one hour a day with my child and rush off to work, why did I have her? She is not a puppy; I want to be there for her as a mother.”

Mira has thrashed the term “feminazi” and called it the female version of chauvinist. In fact, she has gone to the extent of claiming that nowadays, the wave feminism is flowing in a wrong direction. She said,

“I have a set of responsibilities on my plate and my future is ahead of me. I can finish all my responsibilities and then I will have nothing in my way. I can raise my daughter, be a good wife, and set up my home the way I like. I wouldn’t have it any other way… Empowerment means you have the right to choose. So it’s my choice if I want to be at home. And it’s someone else’s choice if they want to be a working mother. But both are equally valid and neither of them should be shamed. Feminism isn’t woman versus man. It’s about equality. A new wave of feminism has come that is aggressive… I feel it’s destructive. There’s a new term called ‘feminazi’, which is the female equivalent of a chauvinist. I think there should be harmony between the two sexes and equilibrium.”

She started getting slammed on social media networks after her statement broke the Internet. Many have written to her, telling that kids of working women are not puppies. Shahid Kapoor tried to save his wife by saying that she was not targeting anybody and her comments were not directed at anyone but people didn’t seem to get convinced with it.

It seems as if there is more to come after this letter! What is your take over the controversy? Do let us know in the comments section below.