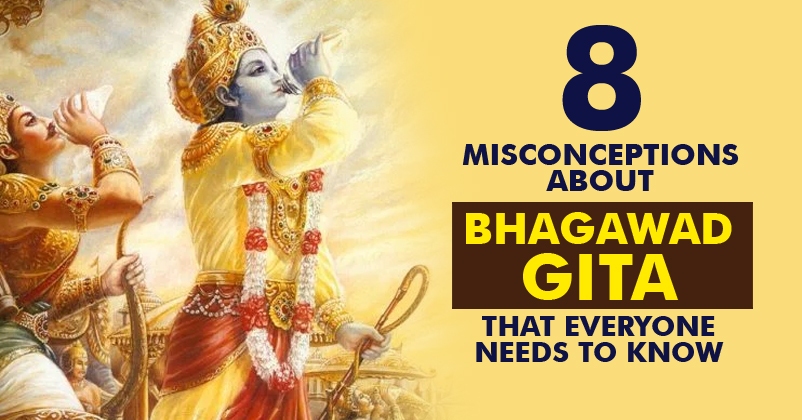 Bhagavad Gita is one of the most important and most followed texts in Hinduism. It has been the pride of its followers for ages now. Bhagavad Gita is considered as the text of ultimate reality, as it tells the ultimate reality of this Universe. But as the reasoning developed, people developed many misconceptions about this holy text. Surprisingly, countries like Russia even decided to ban Bhagavad Gita. Maybe they have misinterpreted about the text or they didn’t understand it.

Let’s have a look at the misconceptions that few people have developed towards Bhagavad Gita.

Only Intellectuals Can Read Bhagavat Gita When we ask somebody about their identity, they tell us that they are engineers, doctors, scientists, writers etc. but according to Bhagavad Gita it is based on two concepts “Tvam” means You and “Ishwara” means God, All those real life identities are just your individual attributes which are based on your mind and your body, but your soul is very pure and it is free from all kind of bonds of the world. Basically, Bhagavad Gita is all about the connection of your soul to the ultimate spiritual reality of this universe.

No Relevance In Today’s World We have seen that lots of youngsters do not believe in God; they often believe that God is ancient and there is no relevance in today’s world. But we have to keep in mind that no one can deny the existence of God and the sun still shines the same way as it used to be. So how the concept of God changed? We have to believe that there is a central Universal eternal power that controls the whole world.

Gita Give Rise To Violence This is one of the most believed misconceptions about Bhagavad Gita. Many of the people believe that Shri Krishna told Arjun to wage violence against all the irreligious people but this is not true. Shri Krishna told Arjuna that everybody should fight against the Evil and for the sake of truth. And not to forget that Mahatma Gandhi’s philosophy of “Non-Violence” was inspired by Bhagavad Gita only.

Gita Is Only Matter Of Belief Many people believe that Geeta is just a spiritual text and there is no value of it in our lives, but this is not true. Bhagavad Gita has lots of practical applications in our life, Bhagavad Gita removes all our illusions about life and that can only be done with knowledge and belief. Bhagavad Gita teaches us the way to deal with all our problems that we face in our daily lives.

These were some of the misconceptions and myths that people developed about Bhagavad Geeta over time. Please share your views in the comment section below.

This Is Why Passports Of All The Countries In The World Are Of Only Four Basic Colors!
Indian Passport’s Color Is Confusing, Blue Or Black? Read To Know What’s The Exact Color